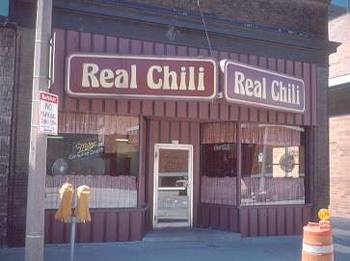 While Real Chili isn't actually a bar, it's definitely a Marquette tradition. Located on the south side of Wells St. between 16th and 17th street, Real Chili has satisfied Marquette students for a quick lunch between classes and after a hard night of drinking. As the bumper sticker says, “It's not just for breakfast anymore!”

If you've been overserved prior to arriving and find the ordering too complicated, simply ask for the “Marquette Special” and you'll receive a bowl of medium with spaghetti and beans. Regardless of what you order, you'll receive a cup of oyster crackers which can be used to top the chili or to be thrown at fellow patrons ONE at a time. Handfulls are not allowed. (you wouldn't be the first)

The menu also includes chili dogs and tacos, but they serve the same purpose as maps, cameras, and I ♥ NY T-shirts: Tourist Identification!

Real Chili has three locations, near Marquette's Campus, downtown Milwaukee, and one in Madison.

Note: The MU campus location does not serve alcohol, but the one in Cathedral Square does. 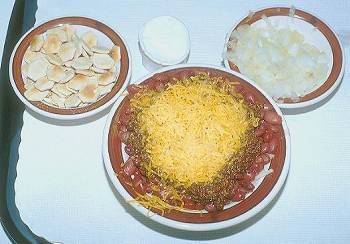 Mix together and dine.

Heat the oil in a large pan and cook onions until tender. Add the meat and cook, breaking it up with a wooden spoon. When meat is browned, add spices, chocolate, broth, tomato sauce and vinegar, stirring to mix well. Bring to a boil, then turn heat to low and simmer uncovered for 1½ hours. It should start to thicken. It is best if refrigerated overnight and reheated the following day.
Serve with options:
· cooked spaghetti
· warmed light kidney beans
· chopped white onions
· shredded cheddar cheese
· sour cream

1. Cinnamon - keep it in the drawer. There isn't cinnamon in Real Chili.
2. Chocolate - see Number 1.
3. Onions - Same as above. Chop 'em up and put them on top if you want, but there are no onions in the chili. Onion Powder? That may be a different story.

As far as the meat goes. I don't think its browned ahead of time. In my last batch I put the raw ground beef right into water and spices, and more or less boiled it and broke it up. It come out nice and fine. Everything is pretty much added in and simmered uncovered for several hours.
1 lb. Ground beef
2 tbsp. Chili powder
1 tsp. Allspice
1 tsp. cumin
1/2 tsp. garlic powder
1/2 tsp. onion powder
1 tsp. salt
2 cups water
1 tsp. vinegar (malt or cider)

Once done simmering - cover and put in the fridge to cool. The fat will rise and harden so it can be removed. (NOTE: Some have suggested removing the fat will remove the flavor.)
Credit: NRJ

Add beef with water, bringing it to a boil. Combine spices then stir in with meat. Add in vinegar and ketchup/paste. Add the bakers chocolate. Stir well. Simmer on medium-high heat for 90 minutes, mixing occasionally.

Light Kidney Beans- (1 big can, 1 regular can)- simmer these over medium heat on their own


Combine spices in a bowl. Throw everything in with the meat instead of browning it first. Do not drain. To help it thicken, I use tomato paste towards the end. Medium-high heat while breaking the meat up, mixing everything until it came to almost a boil. Let it simmer on low heat for about 90 minutes, stirring it occasionally. – The meat is ready when it has a fine texture.

With thanks to 1976 MU Alum Jim Antunes, here's his eyewitness report of the night Real Chili ran out chili —-

After a great afternoon of stomping the hated Irish, I made it to Real Chili. There were two counter guys instead of the normal one person. They knew with an early game, they would be busy so they came in at 8:30, an hour earlier than normal. When I got there, just around 5, they took my order and then they started looking VERY concerned. My bowl emptied the stock pot and the next pot was not done cooking. Real Chili literally had RUN OUT of chili. The guy said that they had gone through 15 pots so far that day and they were planning on staying open until 4 AM. The look on people’s faces when they were told that there was no more chili for at least 30 minutes was complete disbelief. I stayed around for about 15 minutes because between the expression on the counter guys and would be customers was priceless.

They finally decided to put a sign up and then lock the door.

The counter guy said that they were so busy, that the cash register would not close because it was so stuffed with bills and they didn’t have time to empty the register.

The counter guy made me promise not to tell the other stores or he would get in trouble. He literally had done everything possible to keep the chili following, but the orders were coming in too fast.

I’ve been there when they ran out of oyster crackers

Went to the store for saltines, but run out of chili – sacrilege.

Wonder if Francis and Blondie ever had that problem.

Now THAT is one for the record books.