If you've ever been to a Milwaukee Bucks or Marquette Basketball game you have probably been exposed to the eclectic dancing style of Freeway. A huge basketball fan, Freeway, a.k.a. Mike McCarter is at more games than not. His presence has transcended the floor of The Bradley Center, as he is featured prominently in promotional videos run on the jumbotron during Bradley Center events.

He is particularly fond of Marquette basketball. In fact, during the “reign” of Coach Bob Dukiet, Freeway was invited to sit on the bench during home games. Upon Kevin O'Neill's arrival, that arrangement ceased, however Freeway was frequently invited to the athletic offices to watch game tapes.

Freeway attained his name from frequently being spotted standing on the Wisconsin Avenue bridge over I-43 in downtown Milwaukee. Not one to shy away from conversation, Freeway can usually be found around town carrying an Aldi grocery bag complete with Zack Morris style cellular phone because, “trouble lurks at every corner.” Although he is always ready to discuss any topic except hockey, it's highly unusual for a mere mortal to keep up with his fast paced conversations. If you're unable to keep pace with his conversation, you're unlikely to have any success matching his dancing prowess which can be seen in the Bradley Center aisles during Marquette and Buck's games timeouts.

Rumor has it that Freeway was hit by either a city bus or Marquette Limo and settled for a reward of lifetime season tickets to the Bucks, Brewers and Marquette Warriors instead of money. Nevertheless, he rarely misses a game. Former Marquette Men's Basketball coach, Dukiet allowed Freeway to watch the game from the bench. 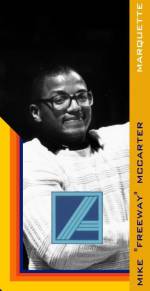