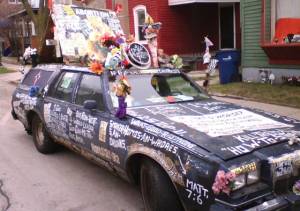 Driving his message home
The Tribune talks with the man inside the 'Godmobile'
By: Joseph Boesen
Written: 3/29/07

Everybody recognizes his car, but the man behind the wheel remains a mystery.

His station wagon is a familiar sight in the warmer months as he cruises along Wisconsin Avenue. The sermons over his megaphone are barely distinguishable over the noise of a passing bus, and even though he drives slowly, most pedestrians still cannot read the messages he scrawls on the side of his car.

To clear up the confusion, Ron agreed to meet with the Tribune and speak about his message to young people, his past and his hopes for the future.

For his own safety, Ron insisted that both his last name and address were left out of the article. Although he is not a member of a religious order, he calls himself Brother Ron.

On top of his wrinkled face sits a green hat with “God's Minute Man” written on it. Ron wears a wall clock around his neck over his camouflage coat and carries two tattered books, one resembling a Bible.

The 63-year-old Vietnam veteran said he became a preacher of “God's Word” after he was saved by God decades ago.

“I was at a bar one night and became surrounded by enemies,” he said. “A woman had made a false accusation, a case of mistaken identity, but these people were drunk and stoned and were going to kill me anyway.”

Ron said he prayed to God and was able to walk out of the bar safely.

“I got into my truck and felt safe and secure,” he said. “I had the gospel on the radio and I felt like the message was for me.”

From that point on, Ron said he gave up being a semi-truck driver and has dedicated the last 25 years to serving the Lord and passing on the Good Word. When asked what religion he followed, Ron replied, “Jesus-only.”

At first Ron tried a more traditional approach to spreading God's word. He was clean-shaven, wore nice clothes and passed out fliers inviting people to come to church. But according to Ron, people reacted in ungodly ways.

“People spit on me, threw things at me,” he said.

Ron said the criminal element of the streets and the lack of street preachers inspired him to step up his visibility on the street and use his car as a purveyor of God's message.

“I felt that if the devil could play his music loud, why couldn't I also share some good news?” he said.

Ron grew up in Milwaukee and wants to help the people here.

“God said, 'Start where your miracle happened,' ” he said.

People believe they are animals and they take away the value of life, which makes it easier for them to start killing one another, he said.

“People should be appreciative that God allowed us to live,” Ron said.

Ron said he advocates fear of God. A message on the back of his station wagon reads, “Kill them all, an' start over Lord.”

“A fear of God is the beginning for many people to come to God,” he said.

Ron has gone to extremities to get his message across. He has considered hiring a skywriter to write religious messages above the city, or hiring a Goodyear Blimp above major sporting events.

Ron also tries to pass on his message of faith to those in power.

“I asked Mark Green if he was born again and what he would do for the Body of Christ,” he said. “He said he was Catholic and started listing all of the religious groups he was in but I don't care about all that.”

Ron said Green's supporters pulled him away before he could ask more questions.

Ron has the same disdain for politicians that they seem to have for him.

“Politicians are committing crimes, then getting off scot-free and they are allowing abortion, homosexuality and prostitution,” he said. “It's almost like they want to create hell on earth.”

Local authorities and Ron do not see eye to eye, either.

He has received a multitude of traffic and noise violations from city, county and state police.

“I got a book full of tickets this wide,” he said with a smile on his face, holding his hands almost a foot wide.

Ron said he was pulled over for a noise violation as recently as Monday.

“I told them, 'If I am breaking the law, it's because God told me to,' ” he said. “There is a separation between church and state: The state is ruled by the devil and the church is ruled by God.”

Ron has had to pay Milwaukee $332.20 in fines since 2002, according to Milwaukee Municipal Court records, in addition to multiple fines before that.

Driving around all day preaching God's word is not a profitable endeavor, at least monetarily.

“I can only serve one master,” Ron said, meaning he doesn't have another master or source of income.

So where does Ron get his money?

“Ron gets donations,” said Bob Brown, longtime friend of Ron. “He doesn't get very much but he does get a little.”

As evidenced by Ron's oil-stained hands, he also is a freelance mechanic.

“If someone needs help on their car, I will fix it in return for something else,” Ron said.

This barter system has worked in the past, but the rising price of gasoline has severely limited Ron's ability to preach.

“I used to go to Madison, Janesville, Sheboygan, all over the place, but now it is too expensive,” he said. “Jesus always said the best business was on main street and my main street is Wisconsin Avenue.

“My battery is running low from driving for so long,” he said.

Ron said he hopes to preach in front of a congregation rather than from his car at some point in the future.

“I'm sure the Lord will make the opportunity available,” he said. “I feel I have proven my sincerity to God.”