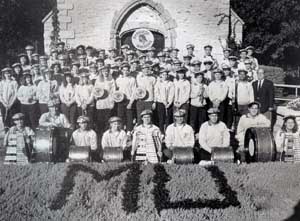 The Marquette Band has been a part of Marquette since the school opened in 1881. From its beginnings as a small pep unit that played primarily at convocations and men's football games, the Marquette University Band gradually evolved into a symphonic orchestra with several smaller ensembles. The band now performs three concerts yearly and provides music for men's basketball games. It does so without the benefit of a music college or an academic major from which to draw its members. Under the directorship of William Jaffe in 1924, the fifty-piece band in gray cadet uniforms made its first concert tour of Wisconsin. On November 8, 1924, the band was a guest of John Philip Sousa at his annual concert in Milwaukee. Sousa dedicated to the band his “Marquette University March,” which was given its world premiere in the Milwaukee Auditorium by the Sousa and Marquette bands. Under Director Herman Zeitz in 1927, the band was among the first to broadcast live concerts over the radio.

In 1930, the College of Music closed. The band was reorganized the following year and continued without benefit of affiliation with an academic program. It resumed touring, performing at University of Wisconsin-Madison football games and in the Great Hall of the Century of the World's Fair Exposition. Under the directorship of Colonel Vesey Walker in the early 1930s, the band played at all home football and basketball games; performed an annual concert, which was open to the public; and offered a musical tour through some of Milwaukee's high schools. Women were admitted for the first time as members of the concert band and orchestra, but were not permitted to march. William J. Geisheker assumed the role of band director in 1942 and held it for over forty years. In the 1940s, the band struggled with a lack of funds and a depleted membership as individuals were drafted or enlisted for service in World War II. Geisheker initiatied the Varisty Varieties, an all-school talent show, in 1943 as a band fundraiser. The shows were extremely popular and provided revenue for the purchase of instruments, uniforms, and music until 1956, when the university provided the band and chorus with annual budgets. Following the end of the war, the first completely civilian band in four years appeared at an October 1946 football game wearing new navy blue, gold-trimmed uniforms tailored in military style. Geisheker developed an outstanding marching band, which played at all home football games and accompanied the team on trips until football disbanded in 1960. 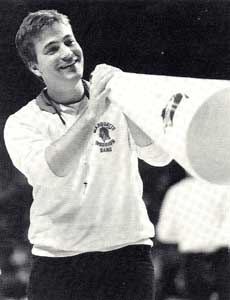 When it ceased to be a marching band, the band turned to more serious music by expanding its yearly program to include three major concerts, as well as playing at all home men's basketball games and other special functions. Band literature courses were introduced for Fine Arts credit in 1967, which helped to improve the musicianship of band members. In the same year, a Cooperative Exchange Program between Marquette University and the Wisconsin Conservatory of Music allowed students of one campus to take courses at the other. When the university's Carillon was constructed in 1967, Geisheker studied in Chicago to become the university's carillonneur, a position he held until his death in 1998. In recent years, the band's most visible function is providing energy and excitement at basketball games. Labeled the “sixth man of the team” by Al McGuire, the band has been to numerous post-season tournaments. Coach Tom Crean has been quoted saying “this band is clearly a major part of the best college basketball atmosphere in the country”. 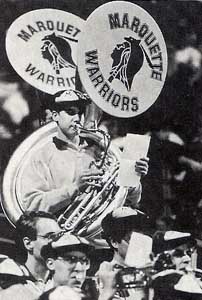 The band includes many smaller ensembles for members who enjoy other styles of music and wish to sharpen their skills, including the Marquette Jazz Ensemble, which began in the mid-1920s as the “Music Masters.” In 1967, the university hired Nicholas J. Contorno to direct the stage band, which became known as the Marquette University Jazz Ensemble. This group plays at all of the symphonic band's concerts, while also performing shows of its own and sponsoring a Jazz Invitational for local high schools. Contorno assumed directorship of the band in 1983 and retired in the spring of 2006.

Bands Through the Years

On December 6, 2006 Jim McIlvaine played drums with the band for the entire Marquette vs. Delaware State game thus becoming the tallest drummer in MU history.