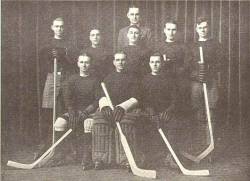 The inaugural season of Marquette Varsity Hockey was 1922-23. That year, the team - coached by George Grady (nicknamed “Buck”) - finished with an 0-3-2 record. They lost once and tied twice with Wisconsin and lost twice to Minnesota. They played their games at the Arena Ice Gardens.

During the 1923-24 season under Coach Jake Thomsen, the hockey team finished with a 3-5 record, losing to Minnesota (four times) and Culver Military Academy (once), but beating Wisconsin thrice. Marquette home games played at the Arena Ice Gardens on 35th & Wells Street.

The 1924-25 team experienced another new head coach, Edward Harold Gerry, and a change in venue - the Arena Ice Gardens closed to become a garage and now they played on an outdoor rink located north of the Old Gym. Despite the adjustments, the team compiled only a 1-2 record due to games called because of weather. The defeated Janesville YMCA, but were shut out in two games versus Minnesota.

Art Schinner replaced Gerry as head coach and the team struggled throughout the 1925-26 season finishing with a 0-5-1 record. Losses came against Wisconsin (twice), Notre Dame, Town Club, and Minnesota (but tied them in the first game).

1926-27 was not only Marquette's inaugural season with the NIHA but their first successful one! Under one of Marquette's most successful hockey head coaches, Kay Iverson, the Marquette team compiled a 5-2 record with wins against Ke-Nash-A (a Kenosha club), Chicago Athletic Club (twice), Illinois Athletic Club, and Wausau, and losses against Rhinelander and Michigan School of Mines. The last three matches of the season (Wausau, Rhinelander, and Michigan School of Mines) were part of the Winter Frolic Tournament in Wausau, WI. This season was also a historical one for three reasons: 1) it was the first season Marquette fielded a freshman and varsity team; 2) the hockey jerseys debuted with “MARQUETTE” emblazoned on the front; and 3) college hockey's famous “Three Macs” began playing at Marquette - George McTeer, Don MacFayden, and Clarence "Pudge" MacKenzie.

Building upon their success from the last season, the 1927-28 team under Coach Iverson would do the unthinkable: complete a season undefeated and win an NIHA championship. This team finished the season with 88 goals for and only 19 goals against! Their 12 wins featured eight games in the Wausau Ice Carnival in Wausau, WI: Kearns Service (twice), Milwaukee Athletic Club (twice), Wisconsin (twice), Michigan (twice), Michigan St., Rhinelander, Wausau, and Minnesota (won once but tied once in 2OT). Another little known milestone was also achieved this season: Marquette's first women's hockey team!

Trying to repeat as champions would prove difficult as the 1928-29 team would end their season with a 9-4 record and as runner-up to NIHA Champion Minnesota. They registered wins against Michigan (thrice), North Dakota (twice), Janesville, Chicago Athletic Club, Wisconsin, and Minnesota. They lost to Minnesota (thrice) and Wisconsin. Overall, Marquette tallied 84 goals for and 20 goals against. On January 18, 1929, Marquette shut out Wisconsin, 9-0, at the outdoor rink near the Old Gym in front of 2,000 fans. On February 12, they would drop a close game to Minnesota, 3-2, in front of 2,500 spectators at the same outdoor rink. During this season, International News filmed a scrimmage game between Marquette men's and women's hockey teams.

The 1929-30 team would experience renewed success as they completed the season with a 12-4 record with wins against Minnesota (thrice), Michigan (twice), Wisconsin, Michigan College of Mines, Hibbing, Virginia, Janesville Athletic Club, Harvard, and Army. They were defeated by Hibbing, Michigan, Minnesota, and Yale. However, due to the poor weather, Marquette did not field a women's hockey team.

Even with John Hancock replacing Kay Iverson as head coach, the 1930-31 Marquette continued to maintain their winning ways as they compiled an 8-4-1 record. Wins against American Legion of Chicago, Minnesota (thrice), Duluth Junior College, Wausau, Wisconsin, and Michigan were buoyed by losses to Duluth J.C., Wisconsin, and Michigan (twice) - the eventual NIHA season champion. Their only tie was against Minnesota, and one home game against Michigan was canceled due to poor ice conditions.

It must have been a bad omen for the Marquette hockey program when there wasn't a women nor freshmen team for the 1931-32 season. Wins proved sparse with only four victories (Michigan Tech (twice), Duluth J.C., and West Bend), four losses (Michigan (twice), Duluth West-Enders, Polish Olympic Team), and one tie (Michigan Tech) - a 4-4-1 record. They did not play the eventual NIHA season champion, Minnesota, during the season.

1932-33 saw the return of Edward Harold Gerry as Marquette's head coach. Sadly, this was to be Marquette's last year of Varsity Hockey. They finished the season 7-3-1 with wins versus Michigan Tech, Wisconsin, Watertown, West Bend, Wausau, American Legion of Janesville, and Marinette; losses to Michigan (twice) and Michigan Tech; and the only tie with the Iron Mountain Iron Kings.

Despite a brief hiatus, hockey returned briefly to Marquette but only as a “minor sport” - between varsity and club status - for the 1937-38 season. 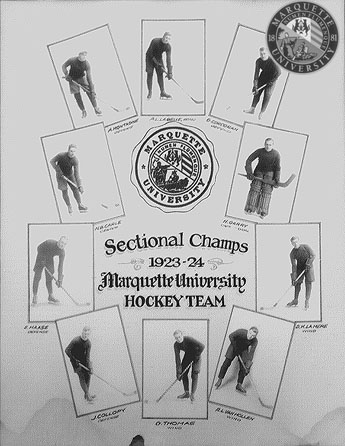 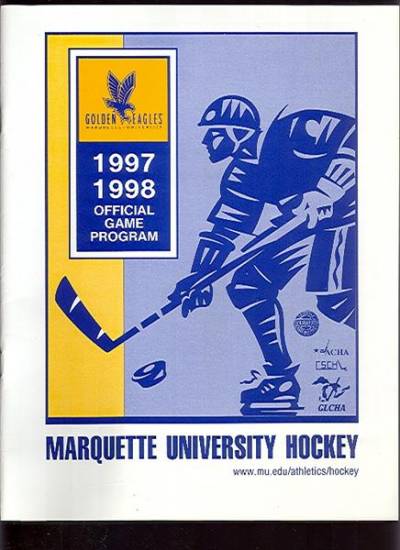