Throughout its history, Al's Run has raised more than $8.5 million to help Children's Hospital of Wisconsin provide medical care, conduct research to advance pediatric medicine, advocate on behalf of children, and educate medical professionals and the community about issues related to children's health. In 2006, 15,236 participants raised more than $1 million for Children's Hospital. Be part of one of Milwaukee's longest running traditions! 2007 will be the 30th running. 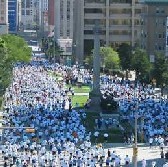 Briggs & Al's Run & Walk owes its success to a wellspring of community support that has benefited Children's Hospital in countless ways. Marquette University basketball coach Al McGuire, the event's founder, was deeply committed to supporting many Children's Hospital programs. Proceeds from the first run and walk went toward the prosthetic limb bank. Today, Briggs & Al's Run & Walk primarily supports the Pediatric and Neonatal Intensive Care Units, each the most advanced of its kind in Wisconsin, and the Hematology/Oncology/Transplant Unit, where children with cancer and blood disorders are treated. Other programs at Children's Hospital receive support when pledge raisers designate their gifts.

After 15 years of active participation in one of the largest and most successful run and walks in the Midwest, Al McGuire announced his retirement from the event. George Thompson III, vice president of Corporate Communications and Community Relations for Briggs & Stratton, was a longtime friend of McGuire's who played basketball at Marquette University during McGuire's tenure. Thompson recognized the importance of continuing the run and walk, and was instrumental in bringing Briggs & Stratton on board as the event's new title sponsor. The title sponsorship role Briggs & Stratton assumed ensured the continuation of McGuire's vision.

Al McGuireWhen Al McGuire passed away in January 2001, Briggs & Stratton vowed to create a lasting, living tribute to him. Thompson suggested one that reflected McGuire's commitment to children and the community, one that would reinforce the hands-on, hard-work approach by which he lived. In Sept. 2001, In a touching ceremony, McGuire's bib #1 was retired forever.