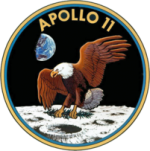 Apollo 11 was the spaceflight that landed the first humans on Earth's Moon on July 20, 1969. The mission, carried out by the United States, is considered a major accomplishment in the history of exploration and represented a victory for the United States in the Cold War Space Race with the Soviet Union.

Launched from Florida on July 16, the third lunar mission of NASA's Apollo program (and the only G-type mission) was crewed by Commander Neil Alden Armstrong, Command Module Pilot Michael Collins, and Lunar Module Pilot Edwin Eugene “Buzz” Aldrin, Jr. On July 20, Armstrong and Aldrin landed in the Sea of Tranquility and on July 21 became the first humans to walk on the Moon. Their landing craft, Eagle, spent 21 hours and 31 minutes on the lunar surface while Collins orbited above in the command ship, Columbia.[2] The three astronauts returned to Earth with 47.5 pounds (21.5 kg) of lunar rocks and landed in the Pacific Ocean on July 24.

Apollo 11 fulfilled U.S. President John F. Kennedy's goal of reaching the moon before the Soviet Union by the end of the 1960s, which he had expressed during a 1961 mission statement before the United States Congress: “I believe that this nation should commit itself to achieving the goal, before this decade is out, of landing a man on the Moon and returning him safely to the Earth.”[3]

In honor of their historic mission, Marquette University retired the number 11 from it's basketball program.