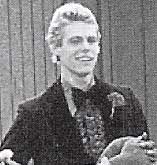 Dudley was team MVP for three seasons and captain as a junior and senior at Racine's Prairie School.

He received numerous accolades over his prep career: All-Racine (two years); All-State (one year); and All-American (one year).

Dudley was also talented as a tennis player, winning numerous prep tennis tournaments and was the runnerup in number two singles in the state meet. He planned to play tennis for Marquette as well.

Before committing to Michigan State, he had considered offers from Marquette, Wisconsin, and Duke.

Dudley originally signed with Michigan State and transferred to Marquette after his freshman season.