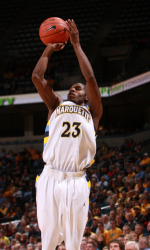 MILWAUKEE - Lazar Hayward had 20 points and eight rebounds to lead Marquette to a 93-68 victory on Tuesday night over South Dakota for its 25th straight non-conference home win.

Darius Johnson-Odom added 18 points and Jimmy Butler 13 for the Golden Eagles (4-0), who improved to 4-0 against the Coyotes in the first game between the two schools since the 1967-68 season.

Tyler Cain, the Great West Conference's preseason player of the year, scored 19 points for South Dakota (2-3), which is in its second year playing in Division I.

The Coyotes will become a full-fledged member of The Summit League beginning in 2011.

While the Golden Eagles cruised on Tuesday, their schedule gets much tougher.

Marquette travels to Orlando, Fla., for the Old Spice Classic and will play Xavier on Thursday afternoon. The Golden Eagles will then play either Michigan or Creighton on Friday and a third game on Sunday before returning to Milwaukee to face North Carolina State on Dec. 5.

The Golden Eagles led 48-35 at halftime and pulled away in the second half, taking a 72-49 lead with 11:31 remaining after Maurice Acker ran off five straight points. Marquette led by as many as 29 from there.

South Dakota hung around for most of the first half, cutting the Golden Eagles' lead to 24-22 with just over eight minutes remaining when Jake Thomas hit a 3-pointer and pumped his fists in excitement.

Thomas finished with 12 points, but the good feelings wouldn't last long against Hayward, one of the top talents in the Big East Conference.

Hayward made a slashing drive from the top of the key, hit the scoop layup and was fouled to complete a three-point play that made it 39-30 a few minutes later.

Another transition layup by Hayward gave Marquette a 45-35 lead, and Acker's 3-pointer from the left corner with 15 seconds left gave the Golden Eagles a 13-point advantage, their largest of the first half.