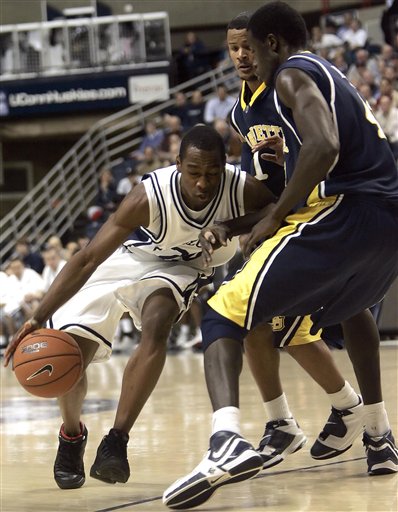 STORRS, Conn. (AP) – Marquette broke a couple of Connecticut's big streaks Wednesday night. More importantly, the Golden Eagles ended one of their own. Ousman Barro had 17 points and 13 rebounds and Marquette used a 16-2 second-half run to beat the Huskies (No. 22 ESPN/USA Today, No. 24 AP) 73-69, snapping their 31-game home winning streak. Jerel McNeal had 19 points and Dominic James added 17 for the Golden Eagles (14-4, 1-2 Big East), who lost their previous two games by an average of 13.5 points. “This was a great get-better, stay-together game for us,” Marquette coach Tom Crean said. “The losses were a great reawakening for our guys to get back to what we are. There weren't a million things wrong with us, we just didn't play the way we had played.” The Golden Eagles were far from perfect on Wednesday, but they did look a lot more like the team that had been ranked all season until falling out of the Top 25 following the losses to Providence and Syracuse. Marquette shot 39.3 percent for the game (24-for-61), including 2-for-10 from 3-point range, but the Golden Eagles finished with a 50-39 rebound advantage and outscored the Huskies 38-22 in the paint. “That was part of the plan,” Crean said of Marquette's inside domination. “They are lethal in the lane and what we did to them in there was a small victory in itself for our team.” Doug Wiggins had 19 points and Jeff Adrien added 18 for the Huskies (12-3, 1-2), who lost consecutive games for the first time since February 2004. Connecticut lost 66-49 at LSU on Saturday and has dropped three of four since starting the season with 11 straight home wins. The Huskies' last home loss was to North Carolina at the Hartford Civic Center on Feb. 13, 2005. They had won their past 14 games in the on-campus Gampel Pavilion. Connecticut, which came into the game averaging 78.9 points on 47.4 percent shooting, finished 19-for-60 from the field (31.7 percent) and had 21 turnovers. “It's very discouraging we can't score and for the second game in a row we had the will of a team imposed on us,” Huskies coach Jim Calhoun said. “Leadership is a problem. Focus is a problem. We haven't developed into a team. I still think we can be good but we have to execute better. We took a ton of shots in the paint that turned into nothing.” Wiggins made two free throws with 10:37 to play to tie the game at 46. Barro then hit a straightaway bank shot from 18 feet to start the Golden Eagles' big run that gave them a 62-48 lead with 4:40 left. The Huskies went 10:02 in the second half without a field goal, missing 13 shots until Wiggins hit a 3-pointer with 3:24 left that ended Marquette's run. McNeal made two free throws with 1:15 left for a 65-53 lead and Wiggins hit a 3-pointer just 12 seconds later to start the Huskies' closing 16-8 run, but the final margin was as close as it got. The Golden Eagles went 8-for-14 from the free-throw line over the final minute. James was 5-for-18 from the field, including 1-for-5 from 3-point range. He was 6-for-23 overall and 1-for-15 on 3s in the two losses. “Going 0-2, you know it's back against the wall, it's kind of an emergency,” James said. “But one thing coach told us is just don't panic. We're going to get this thing turned around, and just stick with the things we're accustomed to doing.” Marquette led 32-28 at halftime and it was amazing that the Huskies were that close. Connecticut shot 8-for-29 from the field (27.6 percent) and committed 12 turnovers, and Marquette outscored them 20-8 in the paint. Connecticut's offense improved enough over the first 10 minutes of the second half for the Huskies to draw even, but erratic shooting allowed the Golden Eagles to go on their big run. Barro had seven points in the spurt, including a big tip-in of a missed free throw by McNeal that made it 57-48 with 6:33 to play. “Barro is a good player who was dominating tonight,” Calhoun said. The 6-foot-10 junior played all 20 minutes in the second half. “We had to have him in there with the things he was doing,” Crean said. Wiggins was 4-for-13 from the field and fellow freshman guard Jerome Dyson went 0-for-5. “It's crazy,” Wiggins said. “There's so much talent on this team and we are wondering, what's stopping us from running our offense. And I don't believe it's the opposing team, it's just us right now.” 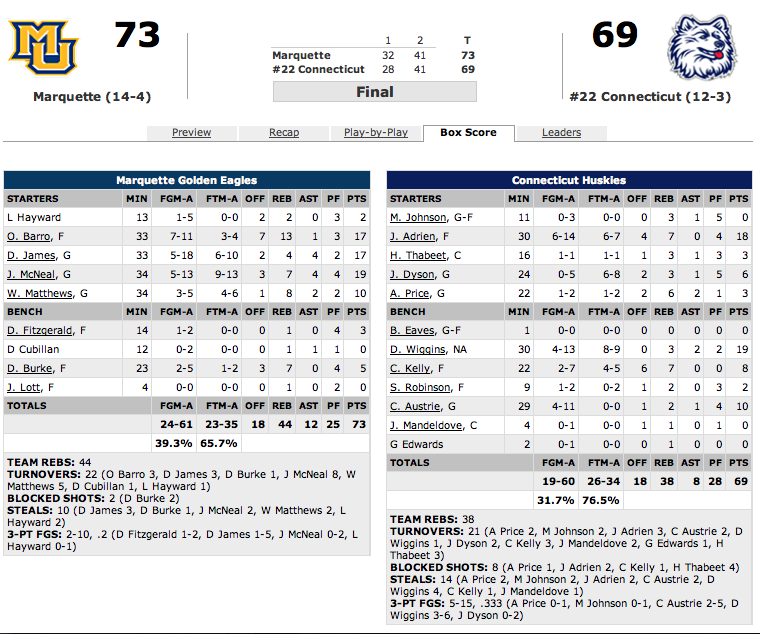