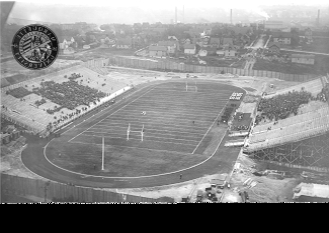 Marquette Stadium was located approximately 23 blocks West of campus, on 36th and Clybourn.The main stadium area contained 9.1 acres that was completely fenced in. The East and West stands held 10,000 people each, and with bleachers behind the end zones, the total combined capacity was approximately 24,000 people. The stadium had a regulation college football field, and a ¼ mile cinder running track. Underneath the West stands there was 16,374 square feet of space containing a boiler room, locker rooms, shower facilities, first aid station, and storage rooms. Adjacent to the main stadium were two practice fields, one with lights.

The stadium was home to Marquette's football team for several decades, until the program's 1960 demise, and was also home to Marquette track meets. Bear Bryant brought his Kentucky team to play Marquette at the stadium, and Mike Ditka made a key play in #6 Pitt's comeback win over Marquette in 1959. This is often regarded as the game that sealed Marquette Football's fate.

After Marquette Football ceased playing there a plethora of outside organizations and institutions began utilizing the stadium, including Marquette University High School Football, Northern Michigan College, University of Wisconsin-Milwaukee, Southern Illinois University, Pius XI High School, various intramural clubs of Marquette including the soccer and track clubs, as well as professional football teams like the San Francisco 49ers, and the Los Angeles Rams, who used it as a practice facility. In 1952, the Green Bay Packers played some of their home games at Marquette Stadium.

According to university records in the early 1970's the university began to believe that the stadium “might have outlived its usefulness or that the funds tied up in it could be put to more productive use elsewhere.” At first the university thought it would be better to sell the property. In 1971 Dunn and Stringer Realty Incorporated showed a great deal of interest in purchasing the property, but that sale did not go through. Instead the university decided to raze the stadium. In 1974 Modern Wrecking Company, Inc. of Elm Grove, Wisconsin was the low bid to raze and remove the debris of Marquette Stadium for a grand total of $58,000. The stadium was dismantled in 1978, and the site is home today to athletic facilities for Marquette University High School. 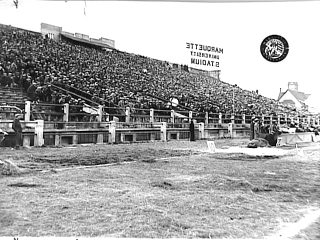 Some of the greatest track stars of the day, including Jesse Owens, competed in a variety of prestigious meets held at Marquette Stadium in the 1930s. In addition to the annual Central Intercollegiate meet, the stadium was the site of the 47th and 50th annual Amateur Athletic Union meets in 1934 and 1937, and the U.S. Olympic decathlon trials in 1936. In the '34 AAU meet, Bill Bothron set a world record and edged Glenn Cunningham in one of the classic 1,500-meter races of all-time. Jack Torrance and Glenn Hardin also set world records in the shot put and 400-meter hurdles. Owens won the broad jump and finished second to Ralph Metcalfe in the 100. In '37, Cunningham, the silver medalist in the '36 Olympics, won the 1,500, which was again the feature event. In the decathlon trials, Glenn Morris finished ahead of Robert Clark and Jack Parker. The three subsequently swept the gold, silver and bronze medals in the Olympics. In the 1935 Central Intercollegiate meet, Owens won three events: the 100, 220 and broad jump. The stadium also hosted the 1944 and 1945 NCAA Track & Field Championships. 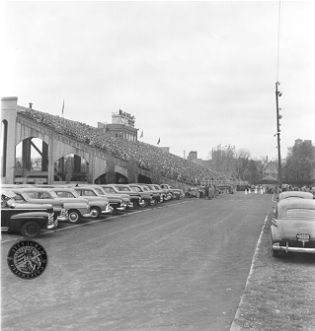 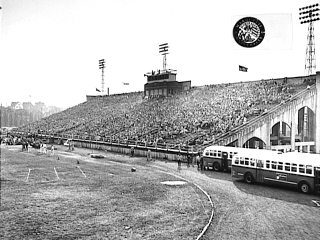