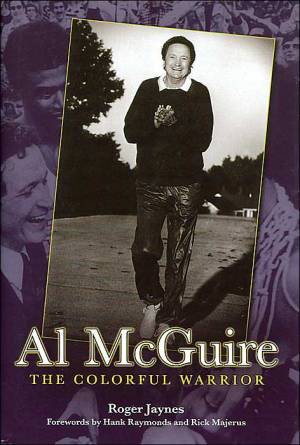 Book Description
Al McGuire was not only one of the most successful coaches in college basketball history, but arguably, as this insightful memoir shows, the most colorful and unpredictable as well. During his 13 years at Marquette, the fiery coach guided his team to more than 20 victories 11 times, earning them 11 straight postseason bids. In 1970, angered that the NCAA wanted to send his 26-3 Warriors to another region, McGuire instead took his team to New York’s Madison Square Garden and won the National Invitation Tournament. Seven years later, after announcing his retirement, the outspoken Irishman beat the odds and went out on top when Marquette defeated North Carolina to garner the school’s first and only NCAA championship. From 1977 until shortly before his death in January 2001, McGuire remained in the national spotlight as a successful TV commentator for NBC, CBS, and ESPN. A recipient of numerous “Coach of the Year” awards during his career, McGuire was inducted into the National Basketball Hall of Fame in 1992. On the court, McGuire was not just a coach, but also a fighter who would do anything he felt necessary to gain an edge. His scrappy, dance-hall teams were a reflection of his street-smart Irish personality. His screaming tirades and zany stunts were all part of the show. Off the court, however, McGuire was a totally different person. What few fans saw was the “other” Al McGuire, the philosopher behind the showman who spoke softly of the deepest issues of life. Like all great men, he had singular demons that haunted him, not just about his coaching career, but also about his place in GodÂ’s whole scheme of things. McGuire’s superior coaching skills and announcing talents made him unique, but so did his quick wit, remarkable intellect, and multifaceted personality. Over the years his entertaining and often controversial remarks and his altercations with fellow coaches, referees, and even the NCAA became legendary. Blessed with the gift of gab, he possessed a marvelous wit and an insightful mind. Depending on his mood or situation, he could be warm and friendly or cold and distant. In one moment of reflection he summed up in a sentence what he felt life was all about: “We reach for the stars as we rush towards our graves.”

About the Author
Roger Jaynes was a sportswriter for the Milwaukee Journal who covered Al McGuireÂ’s final three seasons at Marquette and collaborated as his ghostwriter in later years. The recipient of over 45 national writing awards, he also worked for the Miami Herald and Gannett News Service. In 1977 the Associated Press Sports Editors Association chose him as the countryÂ’s Sports News Writer of the Year. Jaynes has also served as director of public relations at Road America and vice president of corporate communications at the Experimental Aircraft Association in Oshkosh, Wisconsin, where he now lives with his wife. This is his fourth book.