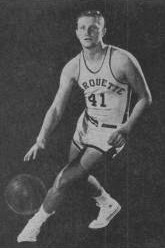 He scored 794 points and averaged 7.8 points per game in his career.

Walczak averaged 7.5 points per game as a freshman.

As a starting guard for the Frosh team, he helped lead the junior Warriors to a National Catholic Invitational Tournament title.

For two years, Walczak won All-European service honors while in the service.

Walczak returned from military service as a 23-year-old sophomore. “The Old Man” averaged 9.4 points per game. At South Bend, Indiana, Walczak scored 27 points versus Notre Dame. He also tallied 18 against Drake and 16 in a victory over Miami (OH) in the first round of the NCAA Tournament. Eventually, he led MU to the NCAA Regional Final, where they lost to Iowa, 86-81. Walczak finished the season ranked second nationally in free throw accuracy, making 104 free throws in 118 attempts (88.1%)

Bob was third on the team in scoring during his junior campaign, averaging 8.2 points per game.

Walczak averaged 5.8 points per game during his senior year.