Led Hinsdale Central to a 55-7 mark during his junior and senior seasons … The Red Devils advanced to the elite eight of Illinois Class AA state tournament during Wardle's junior and senior campaigns … The Suburban Life Player of the Year in 1997 … Chosen to the Chicago Tribune all-state team in 1997 … An honorable mention selection on the USA Today All-USA Team … A three time Daily Herald all-area honoree … Named to the Associated Press Class AA all-state second team as a senior … Earned honorable mention on the 1996 AP Class AA all-state team … Chosen to the Illinois High School Basketball Coaches Association (IBCA) All-State First Team in 1997 and Second Team in 1996 … Set an Illinois Class AA state tournament record with eight three pointers in quarterfinal loss in the 1997 tournament … Scored 34 points in that game … Central's all-time leading scorer (1,632 points) and rebounder (668 rebounds) … Averaged 22 points and 12 rebounds as a senior … Broke Central's 21 year single-season scoring record with 639 points as a senior … The MVP of the WSC Silver Division … Three-time All-WSC Silver honoree … Led the conference in scoring as a junior and senior, the second player to win back-to-back scoring titles … Also led the league in rebounding, blocks and free throw percentage as a senior … Coached by Bob Mueller in high school … Led Team Illinois to the 15-and-under AAU national championship in 1995.

Picked as a C-USA Second Team All-League choice … Named to the NABC/Oldsmobile All-District 11 Second Team … Started all 28 games … No. 1 on the team and tied for No. 8 among C-USA players in scoring with a 16.6 points per game average … Finished No. 7 in the C-USA scoring race for league games (16.9 ppg) … Shot 45.3 percent from the field, good for the No. 8 spot among league leaders … Tied for No. 4 among C-USA players in three-point field goal percentage (.400) … Had 23 double-figure scoring games … 20 points vs. Houston (Mar. 8) was second high on the squad and he tied for the team high with four assists … Sank 10-of-22 field goal attempts en route to a season-high tying 31 points at South Florida (Feb. 24) … Scored 19 of those points in the second half and finished with a career-best six treys … Was the squad�s top scorer in 14 games … Game-high 20 points against DePaul (Feb. 16) … Hit eight-of-16 from the floor en route to a game-high 19 points vs. Houston (Feb. 5) … Reached the 1,000-career point plateau against Southern Miss (Feb. 2) by finishing with with 15 points … Recorded his third straight contest of 20 or more points when he tallied a game-high 24 vs. St. Louis (Jan. 26) … Picked up a game-high 28 points (24 in the second half), against No. 1-ranked Cincinnati (Jan. 23) … Had 11 outings of 20 or more points … Named C-USA Co-Player of the Week after helping MU to wins over DePaul (Jan. 12) and Louisville (Jan. 15) … Tallied a then season-high 31 points, 22 in the second half, in helping MU to a 65-55 win over UNC Charlotte (Jan. 19) … Hit a then career-high five three-point field goals in the game vs. the 49ers … Shot 78.3 percent (94-of-120) from the foul line, good for 4th place among C-USA players … Team-high 17 points, seven rebounds and four assists vs. No. 25-ranked Louisville (Jan. 15) … Drained seven-of-12 from the field en route to 18 points (second high on the team), while dishing out a career-best seven assists, against No. 21-ranked DePaul (Jan. 12) … No. 3 on the team in offensive rebounds with 64 … Had a streak of four games with 25+ points, at the time the longest in the nation this season, snapped against Xavier (Jan. 2) … Led Marquette with 14 points in win over Xavier … Had his first career double-double with 26 points and 12 rebounds versus Coppin State (Dec. 29) … The 12 rebounds were his career high … Eight of those rebounds were offensive, best among the Golden Eagles this season … Scored 28 points, going 8 of 9 from the field and 9-10 from the free throw line, and had six rebounds at Wisconsin (Dec. 23) …. Scored 25 points and had nine rebounds in win over Hampton (Dec. 20) … Tallied a then season-best 29 points, including 19 straight, at Baylor (Dec. 11) … Was 12-21 from the field, both career highs, in that game … Scored 15 points on 7-12 shooting against Dayton (Dec. 7) while contributing five assists … 21 points and four rebounds against Wofford (Nov. 27) … Was knocked out in the first minute of action against Chicago State (Nov. 20) with a mild concussion … Returned to score six points and grab three rebounds in 11 second-half minutes. Served as team co-captain.

- Played in 28 games and made 25 starts … Missed his first collegiate game against Morgan State (Nov. 14) due to a strained right knee … Marquette's top scorer in 12 games … Had 16 double-digit games and surpassed the 20-point mark four times … Scored in double figures in seven of the last eight games of the season … Ranked 15th in C-USA in scoring (12.3 ppg) and was third in free throw percentage (83.0%) … Averaged 12.6 points and shot 88.4% from the free throw line in C USA games … His 36 three-pointers are seventh most by a Marquette freshman … 101 three-point attempts rank fifth among Marquette's sophomores … Shot 35.6% from three-point range, ninth highest among Marquette's sophomores … Scored 36 points, the third-highest C-USA game total, against UNC Charlotte (Feb. 13) … Was 16-16 from the free throw line, setting or tying Marquette, Bradley Center and Conference USA free throw records … Was named the Feb. 15 C-USA Player of the Week after averaging 27.5 points and shooting 62.5% from three-point range in wins over #4 Cincinnati (Feb. 10) and UNC Charlotte (Feb. 13) … Had career-high eight rebounds against Louisville (Feb. 6).

- Named the Conference USA Sixth Man of the Year … Also named to the C-USA All Freshmen Team … Is the fourth player in school history to earn a spot on a conference's all-freshmen or all-newcomer team … Played in all 31 games and started 10 times … Hit a three-pointer in 26 games, including 12 of the last 13 games … Had 15 double-figure scoring games … Marquette's top scorer in seven contests … His 319 points are fifth most ever by a Marquette freshman … Nailed 46 three-pointers, second most by a freshman in Marquette history … Set a freshman single-season record with 157 three-point attempts … That also is the eighth-highest total in a single season in school history … Shot 77.5% (55-71) from the free throw line, the third-best percentage by a Marquette freshman … Shot 80.9% (38-47) from the free throw line in C-USA games, fourth highest in the league … Hit a three-pointer to send the NIT second-round game against Auburn (March 16) into overtime … Had 12 points and five rebounds in that game … Had 11 points and six rebounds in 37 minutes against UNC Charlotte (March 5) … Scored 15 first-half points against UNC Charlotte (Feb. 12), the most points by a Golden Eagle of any first half on the season … Led Marquette with 18 points and finished with seven rebounds against Saint Louis (Jan. 24) … Was 13-16 from the free throw line in that game, both were season highs among the Golden Eagles … Made his first career start against Boston College (Jan. 17) … Hit the game-winning three-pointer as time expired at Louisville (Jan. 3) … Had season-high 20 points to go with six rebounds against Dayton (Dec. 21) … Handed out six assists, then his career high, against Creighton on March 11 … Named to the First Bank Classic All-Tournament Team (Dec. 5-6) after averaging 17 points and shooting 42,9% from three-point range. 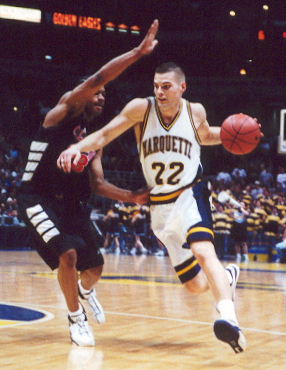 Brian Wardle is in his third season with the UW-Green Bay men's basketball in 2007-08. The former Marquette All-Conference USA sharpshooter joined the coaching staff June 2, 2005.

With the Phoenix he is responsible for working with the team's guards, as well as practice organization and scouting.

Wardle came to the Phoenix after two years as director of basketball operations at Marquette for head coach Tom Crean.

Wardle was a three-year teammate of fellow Phoenix assistant coach Jon Harris and was coached by Tod Kowalczyk as a senior at Marquette.

Wardle is married to the former Lecia Schuetz, a soccer standout during her collegiate career at Marquette. The couple welcomed their first child, a daughter, Mya, in June 2006.