Cracked Sidewalks and French Pastry: The Wit and Wisdom of Al McGuire (2002) 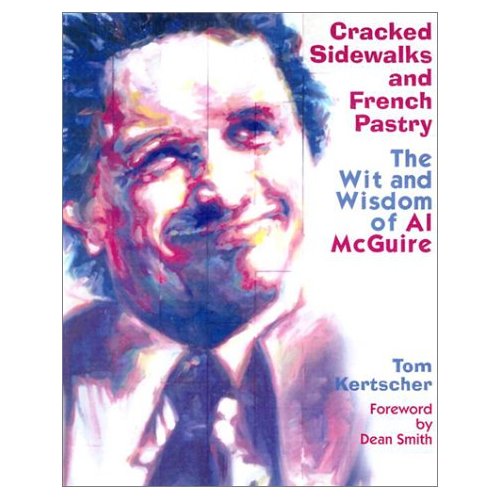 Book Description
Al McGuire was the Mark Twain of college basketball. Never was there a figure in the game so quoted and so quotable, on sports and on the human condition. This book collects more than a hundred of McGuire's most colorful quotations, plus photographs from his life and career, in a tribute that is funny, poignant, and brimming with his streetwise sagacity.

McGuire, a brash and fiery New Yorker who grew up working in his parents' saloon, played a rough and tumble game of basketball at St. John's University and briefly in the NBA before entering the coaching ranks. He reached the pinnacle of his profession and gained national fame at Marquette University in Milwaukee, where in thirteen seasons he compiled a 295-80 record, appeared in nine NCAA tournaments, and won eighty-one home games in a row. He was a fine coach who cared deeply about his players and was beloved by his teams and fans alike, but his flamboyance and his mouth sometimes got him into trouble. The end of his coaching career captivated the nation: McGuire wept on the bench as his Marquette Warriors won the national title.

McGuire then began a ground-breaking career in network broadcasting, adding a zest and unconventionality that the college game had never seen. His sometimes bizarre and always entertaining commentary kept viewers tuned in even after the outcome of a lopsided game was a foregone conclusion. When Al McGuire died of leukemia in 2001, the sports world lost a true original.

From the Back Cover
“Tom Kertscher's book-both words and pictures-helps shed additional light on the complex, complicated, and intelligent man that was Al McGuire.”-Dean Smith, coach of the University of North Carolina Tarheels, who lost the 1977 national championship game to Marquette

About the Author
Tom Kertscher is a legal affairs reporter for the Milwaukee Journal Sentinel. As a teenager in Cedarburg, Wisconsin, he closely followed Al McGuire and the Marquette Warriors, especially during their 1977 national championship season.