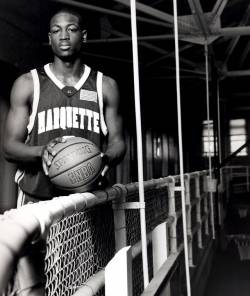 Dwyane Wade was born on the south side of Chicago, to Dwyane Sr. and Jolinda Wade. He cites one of his older sisters, Tragil, as the individual most responsible for his childhood upbringing and for steering him in the proper direction. His parents divorced, and he lived with his father and stepmother in Robbins, Illinois, during his childhood. 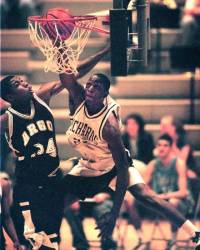 Wade attended H. L. Richards High School in Oak Lawn, playing for the Bulldogs. He did not see a lot of playing time his sophomore year. His stepbrother, Demetris McDaniel, was the star of the team. Growing four inches in the summer before his junior year, Wade proceeded to average 20.7 points and 7.6 rebounds during the ensuing season, while also tallying 100 assists and 73 steals. Wade averaged 27.0 points and 11.0 rebounds his senior year, helping his team to a 24-5 record and a berth in the title game of the Class AA Eisenhower Sectional. He broke the school records for points (676) and steals (106) in a single season. In 2000, Wade was No. 7 in the voting for the Illinois Mr. Basketball Award. Wade was recruited by only three schools — Marquette University, Illinois State and DePaul University. Dwyane Wade was also a notable track star in high school. Wade was raised from a methodically Christian background, thus attesting to his Christian beliefs today. Upon being praised for his feats, he is known to give thanks to God first and chose to wear #3 in homage to the Holy Trinity.

In Wade's first year at Marquette, he did not play because of academic problems. When Wade became eligible his sophomore year, 2001-2002, he led the Golden Eagles in scoring with 17.8 PPG. He also averaged 6.6 rebounds per game and 3.4 assists per game, leading Marquette to a 26-7 record, the school's best record since the 1993-1994 season. In 2003, Wade led Marquette in scoring again with 21.5 PPG; Marquette won the school's first and only Conference USA championship with a 27-6 record, and Wade powered the Golden Eagles to the Final Four, the school's first appearance in the Final Four since winning the 1977 national championship.

Perhaps Wade's most memorable collegiate moment came in the 2003 Midwest Regional Final in the NCAA Tournament in Minneapolis. Against heavily favored, top-ranked and top-seeded Kentucky, Wade recorded a rare triple-double, recording 29 points, 11 rebounds, and 11 assists, including 4 blocks and a steal on defense to lead Marquette over the Wildcats 83-69 and into the Final Four. Wade was only the fourth player in NCAA Men's Tournament history to record a triple-double, after Oscar Robertson, Magic Johnson and Andre Miller. Marquette finished the season ranked #6 in the AP poll, the school's highest ranking since the 1976-1977 season. The first Marquette player since 1978 to earn Associated Press First Team All-America, a United States Basketball Writers First Team All-American and a National Association of Basketball Coaches Second Team All-American, Wade was a finalist for the Wooden, Naismith and Oscar Robertson awards. He burst onto the national radar when ESPN The Magazine nominated him in 2002 as Shooting Guard of the Year. Wade was the Conference USA 2003 Player, and Defensive Player of the Year for what would be his last season in college Wade's strong play in the tournament caused his draft stock to increase significantly, and he subsequently elected to enter the 2003 NBA draft and forgo his senior year at Marquette. On September 28, 2006, nearly 3 and a half years after his final collegiate game, Marquette head coach Tom Crean announced that the university would retire Wade's jersey at halftime of the February 3, 2007 Big East contest between Marquette and Providence. Although Marquette requires student-athletes to graduate prior to receiving jersey retirement honors, the University has made a special exception for Wade based on his accomplishments since leaving Marquette.

Wade played in the 2004 Summer Olympics with fellow NBA all-stars Allen Iverson, Tim Duncan, LeBron James, Shawn Marion, and Carmelo Anthony. Despite the all-star talent, the team won a bronze medal. Wade was named to the USA Men's Basketball National Team from 2006-2008. The team competed in the 2006 World Championships in Japan, in which they finished with a bronze medal. During the Championships, Wade averaged 19.3 points per game. Wade will also compete in the 2008 Summer Olympics in Beijing; the team will also compete at the Tournament of Americas Olympic Qualifiers in 2007. Wade was named co-captain of the 2006 team, along with Lebron James and Carmelo Anthony. 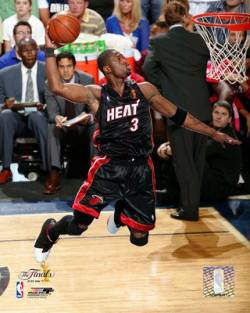 Selected fifth overall in the 2003 NBA Draft, Wade quickly emerged as a star on a relatively young Miami Heat team after averaging better than 16 points, 4 rebounds, and 4 assists in his rookie season. He further distinguishedhimself with outstanding performances in the 2004 NBA Playoffs, particularly against the Indiana Pacers in the Eastern Conference Semifinals. In the end, however, Wade's successful rookie season was somewhat overshadowed by the hype surrounding fellow rookies Carmelo Anthony and, in particular, LeBron James. Wade did earn unanimous selection to the NBA 2004 All-Rookie team and also finished 3rd in rookie of the year voting (behind James and Anthony). He also ranked in the top five among rookies in six major statistical categories, ranked second in field goal percentage, second in steals, third in scoring, third in efficiency rating (15.26), fourth in assists, fourth in minutes, seventh in blocks per game, 11th in rebounds per game, and 12th in free throw percentage.

As a testament to his success, Wade was chosen as a member of the USA's Olympic basketball team during the 2004 offseason. However, he had a limited role as most of the playing time was given to more experienced veterans. But with his defense, Wade was considered one of the few bright spots on a team that otherwise performed poorly by the standards of U.S. Olympics basketball, eventually finishing with the bronze medal. Wade averaged 7.3 points and 17.5 minutes in the eight games that the USA played in the Olympics. He also earned himself a number two rating in registering steals against Olympic opponents, averaging slightly more than two per game.

Shaquille O'Neal was traded from the Los Angeles Lakers to the Heat in the summer before Wade's second season. Wade's scoring average, assists, and rebounding totals increased considerably in his second season with the Heat, and he quickly emerged as a rising superstar in the league. He was elected to his first NBA All-Star Game in Denver and came off the bench to score 14 points in the East's 125-115 win. Compared to the previous year, the Miami Heat under Wade and O'Neal improved by 17 games, from a 42-40 record in the 2003-2004 season, to an Eastern Conference-best 59-23 record in 2004-2005. In the first round of the 2005 NBA Playoffs (a sweep of the New Jersey Nets), Wade became only the seventh player in league history to average at least 25 points, eight assists and six rebounds while making half his shots in a playoff series, averaging 26.3 points, 8.8 assists, and 6.0 rebounds at 50% field-goal shooting (the other players to accomplish this are all members of the Basketball Hall of Fame: Bob Cousy, Oscar Robertson, Wilt Chamberlain, Larry Bird, Magic Johnson and Michael Jordan). Wade accomplished this feat once again in the 2nd round playoff sweep of the Washington Wizards, however, by averaging 31 points, 7 rebounds, and 8 assists over the four games, Wade further distinguished himself, joining Robertson and Jordan as the only players ever to do so. The Heat would go on to lose against the defending champion Detroit Pistons in 7 games during the Eastern Conference Finals. Wade scored 40 and 36 points in Games 2 and 3 respectively, despite playing with sinusitis, the flu, and a knee strain. He also suffered a strained rib muscle in Game 5 of the Conference Finals that kept him out of Game 6 and limited him in Game 7. The Heat would go on to lose the series after giving up a 3-2 lead, and a lead in the final 3 minutes of Game 7, partially because of Wade's ailments.

In the 2005-2006 NBA season, Wade was elected to his second All-Star Game in 2006, in which he made the game winning put-back off of the Philadelphia 76ers' Allen Iverson's missed shot. Wade finished the 2005-2006 regular season averaging 27.2 points, 6.7 assists, 5.7 rebounds, and 1.95 steals per game. Against the Chicago Bulls in the first round of the 2006 NBA Playoffs, Wade shook off a few injuries that scared Heat fans, including a severely bruised hip in Game 5. Returning late in the half, Wade resurrected his team by scoring 15 of his 28 points while suffering from intense pain, leading the Heat to the much-needed 3-2 series lead. After this, Wade successfully led his team to the 2006 NBA Finals, despite suffering from flu-like symptoms in game 6 of the Eastern Conference Finals against the Detroit Pistons. He put up a double-double with 14 points and 10 assists in that game, including an 8-point flurry to close out the 3rd period that put the game out of reach.

In his first trip to the NBA Finals, in which the Miami Heat faced off against the Dallas Mavericks, Wade continued to display his great ability. His performance in games three, four, and five, in which he scored 42, 36, and 43 points, respectively, brought the Heat back from a 0-2 deficit to lead the series at 3 games to 2. Wade's Game 3 performance was especially memorable; Wade finished with 42 points (tying his career playoff high) and 13 rebounds (career high). 15 of his 42 points came in the 4th quarter, in which the Heat erased a 13 point deficit over the final 6:34 with a 22-7 run which included a go-ahead jumper by NBA veteran Gary Payton that sealed the win. The Heat went on to win Game 6, taking the 2006 Finals series 4-2, and Wade was presented with the Finals MVP trophy. Dwyane had the third highest scoring average ever by a player in his first NBA Finals with 34.7 points per game.

At least one journalist claimed that Wade was the recipient of “phantom foul” calls, allowing him to attempt almost as many free throws as the entire Dallas Mavericks team. ESPN journalist Bill Simmons argued that lopsided officiating gave Wade an unfair advantage. [1] On the other hand, Washington Post sports columnist Michael Wilbon believed that the Miami Heat was the better team [2]. 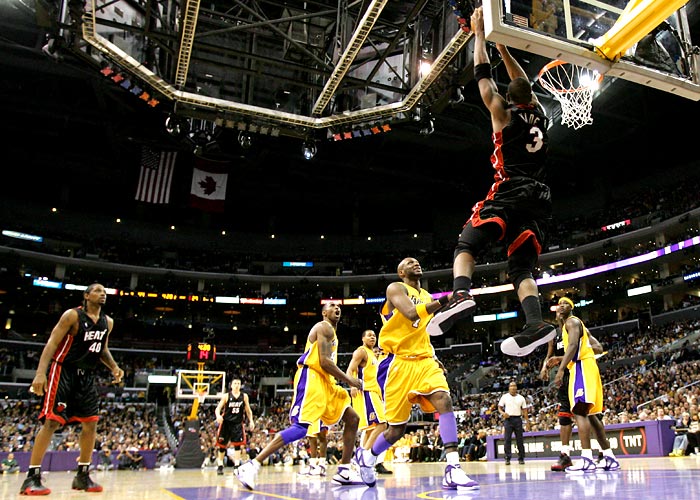 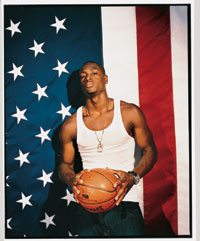