As a junior, Jae was 5'11” and weighed 235 pounds. Then for six months, he worked with his father to slim down - eventually to 207 pounds - and sprouted six inches to 6'5“. He played all five positions during his junior year and, in only his third game, he scored 38 points.

During his senior year, Jae averaged 18.8 points and 7.2 rebounds per game as a point guard for the Villa Rica Wildcats, who finished 17-9. He was named 2007-08 Times-Georgian Co-Player of the Year.

Also, he was the starting quarterback at Villa Rica HS during his junior and senior years.

Jae played one year for the South Georgia Tech Junior College Jets. He led them to their first-ever NJCAA Basketball Tournament berth. The Jets were unbeaten at home sporting a 20-0 record, which included a 68-67 win against Georgia Perimeter in which Jae had the game-winning three-point play.

He averaged a double-double entering the state tournament of 17 points and a conference-high 10.3 rebounds a game. The Jets reached the Elite Eight before losing to runner-up Midland College (Texas) and Garden City (Kan.) in finishing as Region XVII champions with a 28-8 record.

Due to non-accreditation status levied to South Georgia Tech JC, Crowder stated he signed with Northwest Florida State, formerly known as Okaloosa-Walton. But somehow he ended up with Howard JC in Texas. 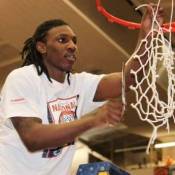 Powered by Jae's 27 points and 12 rebounds in all of the game's 45 minutes, Howard came from behind to beat Three Rivers Community College (MO) in the NJCAA title game, 85-80 in overtime. Jae appeared to have scored the winning basket on a last second tip-in, but the effort was waved off because the buzzer had already sounded.

On February 3, 2010, Crowder committed to Marquette despite scholarship offers from Georgia, Illinois State, Texas Tech, and UNLV. Baylor and South Alabama were also interested in Crowder.

Had a solid MU debut with 11 points on five field goals and finished with seven rebounds, including a game-high four offensive boards, in season-opening win over Prairie View A&M (Nov. 12) … Tallied his first double-double in his second game as a Golden Eagle, recording 10 points and 10 rebounds in a come-from-behind win over Bucknell (Nov. 14) … Poured in 17 points on 7-of-11 shooting to lead MU in scoring vs. Green Bay (Nov. 17) and added a game-high nine rebounds … Posted 15 points and five steals vs. Duke (Nov. 22) … Had a game and career-high five steals vs. Gonzaga (Nov. 23) and was one of three MU players to score in double figures with 10 points … Added nine points and six rebounds vs. Milwaukee (Nov. 27) … Dished out three assists and pitched in 10 points, six rebounds and three steals vs. Longwood (Dec. 4) … Posted 15 points and five rebounds vs. Texas A&M-CC (Dec. 7), and had a team-high two 3-pointers … Earned his first career start at MU vs. Centenary (Dec. 18), finishing with eight points, six rebounds, two blocks and a pair of steals … Posted 22 points vs. Mississippi Valley State (Dec. 21), including an impressive 12-point run during a stretch in a one minute, 19 seconds in the first half, and also notched a career-best three 3-pointers … Named to BIG EAST Honor Roll (Dec. 27) … Had 11 rebounds vs. Vanderbilt (Dec. 29) … Paced MU with a game- and career-high 29 points vs. West Virginia (Jan. 1) … Shot 12-of-14 from the field, including a perfect 7-of-7 in the second half, in the win over the Mountaineers, while adding five assists … Named to the BIG EAST Honor Roll (Jan. 3) for the second consecutive week … Finished with a team-high seven rebounds and scored 15 points vs. Rutgers (Jan. 5) with three of his six field goals coming from behind the 3-point line … Posted 10 points and seven rebounds vs. Pittsburgh (Jan. 8) …­ Contributed 18 points, including a career-high four 3-pointers, in win vs. Notre Dame (Jan. 10) … Had three blocks and six assists, while chipping in 18 points and nine boards vs. DePaul (Jan. 18) … Posted 15 points and a team-best eight rebounds vs. Notre Dame (Jan. 22) … Tallied 10 points and a team-high nine rebounds vs. Connecticut (Jan. 25) … Led team in scoring with a 25-point effort vs. Syracuse (Jan. 29) … Shot 5-of-6 from the field and 4-of-5 from beyond the arc, including a pair of 3-pointers down the stretch, to help MU rally for a 59-58 win vs. USF (Feb. 9), adding a team-high 14 points … Posted a career-high four blocked shots vs. Georgetown (Feb. 13) and added seven rebounds and a pair of steals … Chipped in 15 points, four assists, two steals and had a team-high nine rebounds vs. St. John's (Feb. 15) … Scored 12 points and had a team-high nine rebounds vs. Seton Hall (Feb. 19) … Posted 11 rebounds, including seven offensive boards, in the overtime win at Connecticut (Feb. 24) … Pulled down a career-high 13 rebounds and added 12 points vs. Providence (Feb. 27) for his second double-double of the season … Pitched in 10 points vs. Providence (Mar. 8) in first round of BIG EAST Championship … Grabbed nine rebounds and three steals, both game highs, in come-from-behind win vs. West Virginia (Mar. 9) … Scored 10 points vs. Louisville (Mar. 10) … Added 10 points, including 4-of-6 shooting from the field vs. Xavier (Mar. 18) in the NCAA Second Round … Scored 14 of his 16 points in the second half and pulled down a team-high seven boards in MU's 66-62 win over Syracuse in the NCAA Third Round; was 7-of-8 from the foul line in the final stanza and also hit a clutch 3-pointer to tie the game at 59-59 with 2:25 remaining … Posted 11 points, eight rebounds and a team-high three blocks vs. North Carolina (Mar. 25) in NCAA Regional Semifinal.

Prior to the NBA Draft, Jae participated in the individual workouts for the Oklahoma City Thunder, Cleveland Cavaliers, Indiana Pacers, Atlanta Hawks, and the Memphis Grizzlies. He also participated in the following NBA pre-draft combines: Minnesota, New Jersey, and Chicago.

Crowder was selected as the 34th overall pick in the 2012 NBA Draft by the Cleveland Cavaliers. However, he was traded to the Dallas Mavericks along with the 24th overall pick Jared Cunningham and the 33rd overall pick Bernard James in exchange for guard Kelenna Azubuike and the draft rights to 17th overall pick Tyler Zeller.