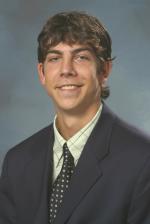 Appeared in eight games … His lone field goal was a three-pointer against Eastern Illinois (Nov. 26) … Sank both of his free throw attempts against Coppin State (Nov. 22) … Played in MU's NCAA contests against Kentucky where he dribbled out the clock as Marquette reached their 3rd Final 4 appearence (Mar. 29) also appeared in a loss against Kansas (Apr. 5)in the 2003 Final 4 in New Orleans.

Three-time letter winner at Benilde-St. Margaret's High School where he played for John Moore … Served as his team's captain and was chosen as his squad's MVP as a senior and also given the Coach's Award… Averaged 10.6 points and 6.6 assists per game during the 2001-02 campaign in helping his club to a record of 21-8 … Also lettered three times in tennis and was captain of the squad … Two-time monogram winner in soccer.

Born Mar. 31, 1983 … Son of Jerry and Joni Sichting … Is the oldest of 4 children… His father, Jerry, played in the National Basketball Association for 10 years and won a championship with the 1986 Boston Celtics. He is currently an assistant coach with the Minnesota Timberwolves. Also served as an Assistant Coach at Marquette during a brief hiatus from the NBA.