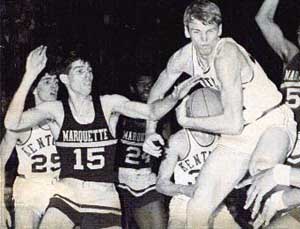 Sewell played high school hoops at Grafton from 1963 to 1966. As a senior, he averaged 30 points per game and led all state scorers.

He garnered AP second team all-state and UPI all-state honors as a senior.

Sewell scored 1,644 career points and is currently ranked eighth all-time in single season scoring in the state of Wisconson with 818 points.

The following year, he averaged 11.7 points per game and led Marquette with 22 points in their effort to beat Saint John's and take home the NIT Championship in 1970.

Indiana selected Sewell in the 15th round of the 1970 ABA draft, but he never played for the team.