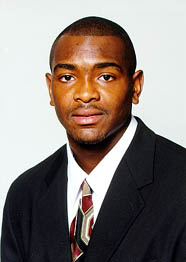 Scored more than 1,500 points in his prep career at MacArthur High School in Decatur … Became a varsity starter in the middle of his freshman season and stayed in the starting lineup throughout his prep career … Was a four-time all-conference selection in high school … Received honorable mention on the all-state team following his senior season … Led MacArthur to the regional tournament in 1996 … Averaged 17 points, 9 rebounds and three steals during his senior season … During his junior campaign he averaged 18 points and 8 rebounds … An all-state selection as a sophomore … Averaged 21 points, 7 rebounds and 3 steals that season … Coached by Bobby Darling at MacArthur.

John was named team co-captain. Coming into the season, he had played in 89 career games, more than any other player on the squad, and made 19 starts … He also cam into the season tied for seventh place in school history with 102 three-pointers and ranks seventh with 308 three-point attempts.

Saw action in 28 games and made six starts … Was third on the team with a 9.5 ppg average … Paced the team and was fourth in Conference USA in three-point percentage (38.5%) … That percentage is second highest ever by a Marquette junior … Averaged 11.6 points and 4.3 rebounds and shot 41.7% from three-point range in C-USA action … Tied for the league lead with 2.5 three-pointers per game … Led team in scoring five times and in rebounding four times … Had 13 double-figure scoring games … Scored 20 or more points twice … Hit 55 three-pointers, which is 10th best in a single season at Marquette … Exploded for 37 points, the second-highest mark in a C-USA game, against Memphis (Feb. 21) … It also is the third-best point total in any game in Conference USA history … Was 15-22 from the floor against the Tigers … His 15 field goals are the most by a C USA player in the four-year history of the league … Had 23 points on 5-6 shooting from three-point territory at Louisville (Feb. 6) … Posted his first career double-double with 11 rebounds against Memphis … Also set or tied career highs in assists, blocks and steals.

Played in all 31 games and made 10 starts … Started five consecutive games midway through the season and averaged 12.2 points and 4.6 rebounds and made 13 three pointers in that span … Was Marquette's top scorer four times … Hit a three-pointer in 18 games, including six of the final seven … His 33 three-pointers were seventh highest by a Marquette sophomore … Attempted 110 three-pointers, the fourth-highest total ever by a sophomore … Had career highs of 17 points, two steals and 33 minutes against Boston College (Jan. 17) … Set a career high with four three pointers in his first career double-figure scoring contest … Had career highs of six field goals, six rebounds and two steals at Tulane (Feb. 1) … Tied his career bests with four three-pointers and two steals at Southern Miss (Jan. 29) … Also hit four three-pointers versus DePaul (Feb. 7) … Dished out four assists, his career best, against Houston on Feb. 14.

Played in 30 games and made three starts … Made 14 three-pointers, ninth most by a freshman in school history … His 55 three-pointer attempts were eighth highest total by a first-year player … Played 10 or more minutes 11 times … His season high was 24 minutes at UAB (Feb. 17), a game in which he started … Had a season-high nine points at UNC Charlotte (Feb. 15) … Tied his season high with nine points against Cincinnati (March 7) in the Conference USA Tournament semifinals … Drilled a season-best three three-pointers in that win … All of his three-pointers came in the first half … Grabbed season-high four rebounds against Maine (Feb. 5) and Southern Miss (Jan. 4) … Started in back-to-back games against Wisconsin (Dec. 31) and Southern Miss (Jan. 4) … Scored his first collegiate points with a three-pointer at Santa Clara (Nov. 29) … Made a three-pointer in 10 games.