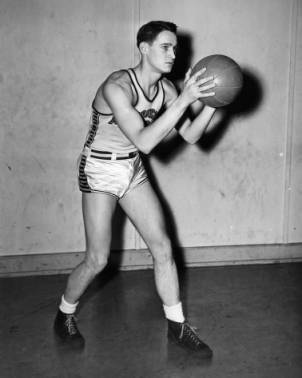 Wiesner was also an exceptional track and field athlete at Marquette.

A three-time All-America performer in the high jump, Kenneth Wiesner claimed three NCAA championships in the high jump from 1945-1947 while also playing for the MU basketball team.

During his junior year he set a school record in the high jump with an effort of 6' 8 3/8” at the NCAA meet in Minneapolis.

Following his graduation in 1947, he didn't compete for nearly four years. In 1952, he began his comeback and eventually scored a stunning victory in high jump at the 1952 Los Angeles Coliseum Relays, defeating future Olympic champion Walt Davis of Texas A&M.

He qualified for the 1952 Olympics and was a silver medalist in the high jump. In 1953 he broke the world indoor mark in the high jump with an effort of 6' 10 3/4“ at the Chicago Relays.

Wiesner was inducted into the Marquette M Club Hall of Fame in 1974.