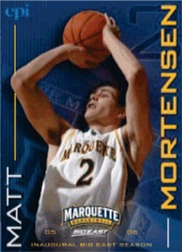 
Matt Mortensen was red-shirted during his first year at Marquette.

“Marquette Golden Eagles freshman forward Matt Mortensen will not have his scholarship renewed and has been dismissed from the team, athletic director Bill Cords announced Monday night.

According to a release provided by MU, Mortensen has rendered himself ineligible according to NCAA regulations.”

The release went on to say the decision to dismiss Mortensen was not related to academics.