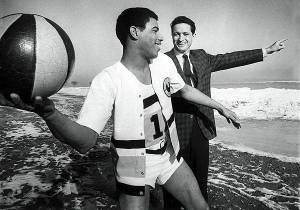 Pat averaged 5.8 points per game during the 1966-67 season. He averaged 10 points per game the following year, but is probably best known for fighting with the DePaul Blue Demons' second leading scorer and rebounder, Bob Zoretich, in a 1968 game at DePaul's Alumni Hall. Both were ejected and this incident prompted DePaul coach Ray Meyer to state that MU lost a player “who couldn't throw a ball in the ocean if he were standing on the beach.” Marquette coach Al McGuire then proceeded to set up a photo session with Pat Smith standing on the shore of Lake Michigan, trying to throw the ball into the lake (see above picture).

He last worked for the Maryland Police and Correctional Training Commission before retiring.