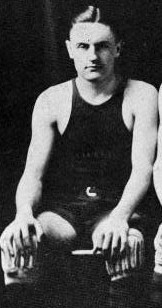 Reviewing the achievements of Marquette basketeers should be largely a eulogy of “Dickie” Quinn. Playing his first year of basketball for the varsity cagers, Quinn became a part of the sterling passing trio, which included Duford and Dunn. He was “Dead-Eye Dick” when it came to finding the basket with free throws, passing the leather through the ring over 90 times in 127 attempts.