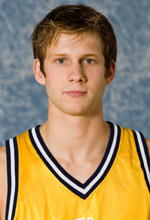 Was a three-year letterwinner in basketball at Sheboygan North High School…Won the conference championship and led North to the sectional finals in all three seasons…His teams were 60-6 during his three seasons and never lost a conference game…Named team's MVP his senior year…Also earned three letters in football as a wide receiver/tight end.

Walk-on that appeared in 7 games…Assumed reserve point guard role responsibilities as a result of injuries to Travis Diener.