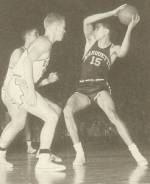 Rand played for Green Bay East from 1950-52, scoring 853 career points, including 570 as a senior. Rand was a two-time all-Fox River Valley selection and played in the North-South All-Star Classic, in Murray, Kentucky.

Rand began his undergraduate studies at Marquette University and made a name for himself as a member of the basketball team. He led the team in scoring and rebounding as a sophomore(15.8 ppg), junior(15.8 ppg) and senior(20.2 ppg), and was one of the school’s first All- Americans. In 1955 he was on the first team from Marquette to go the NCAA Tournament, and he still holds the school record for most points in an NCAA Tournament game (37 vs. Miami (Ohio). In 1956, Rand scored 43 points against Duquesne, which remains a Chicago Stadium scoring record. When he was inducted into Marquette University’s Athletics Hall of Fame in 1996, he ranked 14th on the university’s career scoring list with 1,309 points, and third in rebounding with 978.

During March 26-31, 1956, Rand played for the local Amateur Athletic Union (AAU) basketball team, Milwaukee's Allen-Bradley. During the AAU tournament's semifinal match, he scored 20 points but his Allen-Bradley team lost to the eventual champions, Buchan Bakers. (Allen-Bradley would finish in fourth place, losing to the Ada Oilers, 77-76.) Rand was named to the AAU All-American Tournament Team. Ironically, he would play for the same Buchan Bakers during the 1956 Olympic Trials. Buchan Bakers History

During the Olympic Trials, Rand scored 10 points as his team, Buchan Bakers, lost the first game to the Bill Russell and K.C. Jones-led College All-Stars, 86-79. Then next day, the second game was another loss, this time to the Phillips Oilers, 72-64, with Rand scoring 5 points. The third and last game featured a Rand scoring 13 points in a victory over the Armed Forces All-Stars in a close one, 82-79. Rand finished the Olympic Trials as the 14th highest scorer with 28 points (11 FG and 6 FT made) while Russell led all scorers with 72. Rand would be named as an alternate to the Olympic Team. 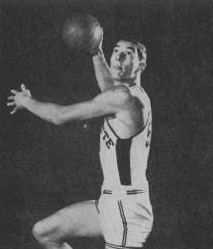 Rand was drafted by the Minneapolis Lakers in 1956, but at the time, the team was practically bankrupt. There was no television revenue back then, and the salaries were very low by comparison to today’s multimillion dollar contracts. He was offered $7,500 a year, but decided not to play in the NBA. Instead, he chose to play for the Denver Truckers, an amateur team in the National Industrial League. The Denver owners offered a $400 a month executive trainee position, fringe benefits, and a sizable bonus. Also included were law classes at Denver University. That league existed for about eight years. Rand actually made more money than he would have if he had chosen to play with an NBA team.

At the time of his induction, Terry Rand stood 14th in career scoring at Marquette with 1,309 points and third in rebounding with 978 caroms. He was the team’s leading scorer and rebounder as a sophomore, junior and senior. He averaged 15.9 points and 14.7 rebounds per contest during the 1954-55 campaign and helped Marquette to the program’s first-ever NCAA Tournament appearance. That team went on to post an overall record of 24-3 while finishing eighth in the nation in the Associated Press rankings and ninth in the United Press International poll. In 1956, he scored 43 points against Duquesne and in the process established a Chicago Stadium scoring record. He was picked to the All-Catholic All-America Team in 1955-56 and was tabbed as the squad’s MVP. Rand still holds the school record for most points in an NCAA Tournament game (37 vs. Miami (OH) in 1955). He was chosen as an alternate to the 1956 Olympic Team. Inducted in 1996.