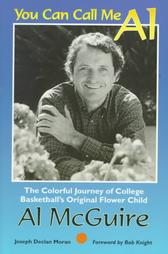 Book Description The full story of one of the greatest and most colorful coaches in the history of college basketball, told here for the first time. From the playgrounds of Rockaway, to the NCAA championship, to the broadcast booth, there has been only one Al McGuire. This is his story, as quick-paced and fascinating as the coach himself.

About the Author Joseph Declan Moran has worked the past 20 years as a journalist and editor in his native Chicago. Moran's interest in sports, especially college basketball, was spurred during his undergraduate days at Marquette University, where he earned his bachelor's degree in journalism in 1980. He earned his master's degree in broadcast journalism at Northwestern University's Medill School of Journalism in 1985. You Can Call Me Al is his first book. Joe and his wife, Kristen, reside in Chicago's northwest suburbs.