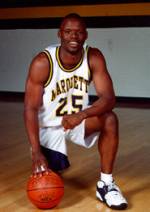 The all-time leading scorer and rebounder in Fitchburg High history … Ranks second on the all-time assists list … Led Fitchburg to the state tournament three of four seasons … Averaged 28 points, 10 rebounds and 7 assists as a junior and senior … Scored 43 points in the state championship game as a junior … The MVP of his league four straight seasons … A Street and Smith's All-American as a senior … Also was named a McDonald's All-American following his senior campaign … An all-state and All-New England honoree following his senior season … Coached by Doug Grutchfield.

Averaged 29.0 points, 5.0 rebounds and 6.0 assists at Northfield (Mass.) Mount Hermon Prep School … His team advanced to the third round of the New England Prep School Tournament … Coached by William Batty.

Zack McCall accepted a football scholarship to Syracuse University after his graduation from high school, but decided that basketball was still his first love and decided to leave, and entered Northfield-Mount Herman. He was given a basketball scholarship at Marquette University, and competed in the NCAA tournament in his sophomore year. Later he would play basketball in Huron College in South Dakota from 1997 through 1999. He was selected as a second team All American in the NAIA in 1999.

April 10, 1996: McCall lost a year of eligibility because he tested positive for marijuana during the NCAA tournament. McCall did not rejoin Marquette for the next season.

Saw action in 30 contests … Hit two three-pointers for six points against Arkansas (3/16) in the NCAA Tournament second round… Scored four points and had two rebounds against Memphis (3/8) … Scored seven points, including five straight in the first half, against Cincinnati (3/2) … Connected on two three-pointers in the first half at Louisville (2/28) … Scored four points and had three steals at Saint Louis (2/25) … Had eight points, including six consecutive during a key stretch, against UNC Charlotte (2/22) … Scored six points and grabbed four rebounds versus DePaul (2/11) … Had four assists and two rebounds in win over South Florida (2/7) … Made his first career start against UAB (1/30) … Responded with seven points … Scored five points and grabbed two offensive rebounds at UNC Charlotte (1/25) … Scored four points, grabbed three offensive rebounds, and handed out three assists versus Illinois-Chicago (1/15) … Had three points, four rebounds and four assists against Morgan State (1/2) … Scored seven points in win over Vermont (12/22) … Played 25 minutes and scored six points and handed out two assists against UW-Green Bay (12/2) … Had nine points against Columbia (12/1).

Today Zack works for Coca-Cola Bottling Company in Northampton, Massachusetts, and was recently married to Angela Anderson. He has three children Alexis Hebert, Devonte’ and Jayla. He loves spending time with his family and writing poetry.