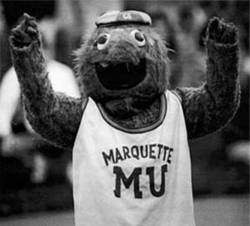 Marquette has both “Bleuteaux” and “Blueteaux” as spelling for the creature. Even the Marquette Tribune was never able to select a specific spelling. Bleuteaux was a blue “muppet like creature.” He served as Marquette's official mascot from 1984-1991. He was often seen wearing a blue and gold beret, and a simple Marquette basketball jersey, but that changed depending on the year and the sport.

Originally Bleuteaux was to be known as the “Big Blue,” but due to copyright restrictions, thanks to the University of Kentucky whose mascot was also known as Big Blue, the nickname was not viable.

In 1984 after an intense competition where 887 votes were cast Bleuteaux, known as Big Blue at the time, was selected as the winner of the mascot selection. Big Blue received 350 out of 887 total votes. The closest competition was the Yak, who finished with 314 votes. Sam Dunk and the MU Cow followed with 168 and 55 votes, respectively.

According to old issues of the Marquette Tribune Bleuteaux “Big Blue' originally would have had an oversized body with blue fur, a short trunk and large silly eyes. He would wear a Marquette shirt and bright yellow high-top sneakers. Springing from his head would be antennae with small basketballs.”

When it came time to decide the nickname of this new mascot Bleuteaux was ultimately selected. Bleuteaux beat out the Marquette Maniac by 41 votes, 173 were submitted. According to Judy Myers, associate director of alumni relations, Bleuteaux was chosen because…“we thought of the character Bluto in 'Animal House' and because of Pere Marquette we thought we should make it French.”

Bleuteaux made his debut performance against the Chinese National Basketball team on Saturday, November 10, 1984.

By 1990 it was clear that Bleuteaux would no longer remain the mascot of Marquette University. The next mascot would not be named until after naming/mascot controversies that would lead to Marquette's selection of the Goldent Eagles.

Peter Kujawa, ASMU senator from Mashuda Hall, “The more (men's basketball) games I attend, the more I notice the student apathy toward Bleuteaux and the inability of our mascot to fire up the crowd.”

Kujawa would later be involved in the committee that led to Blueteaux's demise.

Steven Solomon, Engineering '86 “I think that it is very interesting that the university spends so much time arguing back and forth over a mascot when there are so many other important topics that should be more important to the students than whether the name, color, and form of a mascot they don't back very much anyway.” 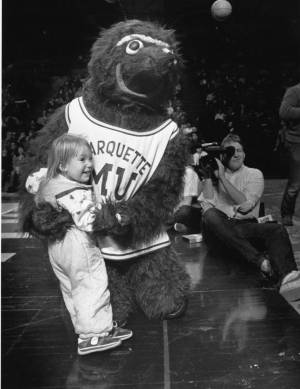 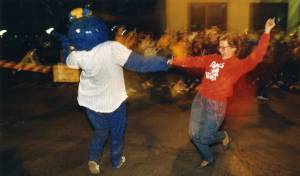 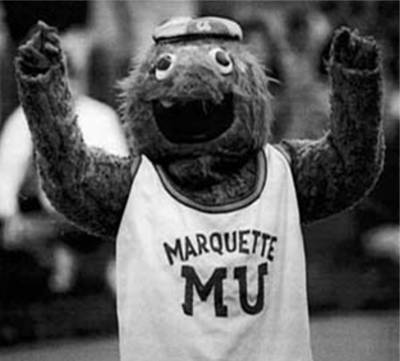 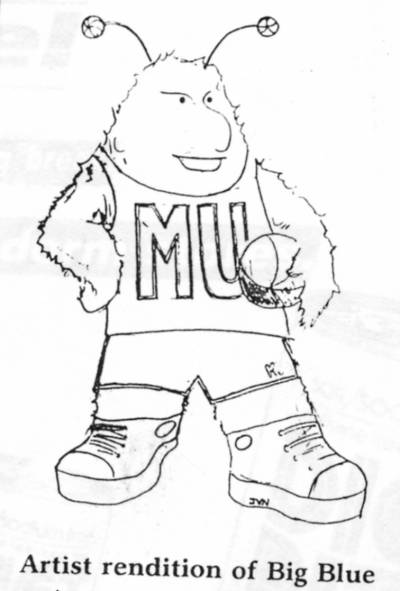