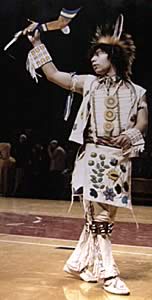 The American Indian Warrior was selected rather than a Spartan or Amazon warrior because the first inhabitants of the land in which Marquette is located were Indians, and secondly, because the name of the University was chosen to honor the memory of Father Jacques Marquette, S.J. During the 17th century, Father Marquette came into contact with the American Indian Tribes of this region during his explorations.

Lila Blackdeer, a Winnebago Indian from Black River Falls, Wisconsin, was contracted in 1978 by the MU American Indian students to craft the suit to be worn by the “First Warrior.”

With input from Marquette students, faculty and administrators, the athletic logo incorporates several elements of the First Warrior's regalia:

Eagle Feather - held in place by a deer bone is also of spiritual significance.

According to a Marquette University Office Memorandum to Dr. James Scott, “The First Warrior was selected in the late 1970s to be a symbol of Marquette's relationship with Indians an to visualize the university's support of this symbol.”

However, the First Warrior's refusal to engage in demeaning sideline antics puzzled or bored most students, and the character failed to become a rallying symbol for the university.

1980-81 season - Mark Denning, a sophomore from West Allis, was selected to be the First Warrior.

1980-81 season - Rick Tourtillott, a sophomore from Milwaukee, was selected to be the First Warrior.

Official memorandum from the First Warrior Advisory Committee to Dr. James Scott, vice president for student affairs, (dated February 1987) states that “the First Warrior was selected in the late 1970s to be a symbol of Marquette’s relationship with Indians and to visualize the university’s commitment.” 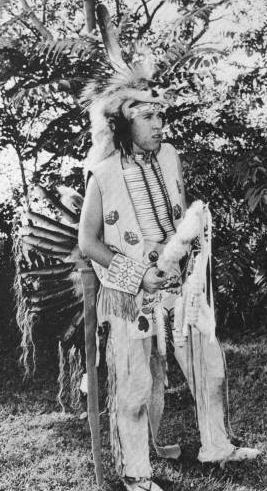