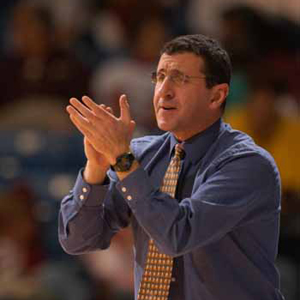 The Brooklyn, NY native began his coaching career as an assistant at Nazareth College (1984-85) and at Buffalo State (1985-86). Jabir was instrumental in leading the Bengals to a 23-3 slate, the SUNYAC title, a 22-game winning streak, an NCAA regional tournament appearance and a national ranking (No. 3) during the 1985-86 season.

After one season as an assistant, Jabir became the head coach at Buffalo State during the 1986-87 season at the age of 24. He led that team to a 14-11 record and guided the Bengals to the State University of New York Athletic Conference (SUNYAC) championship and an appearance in the Division III Tournament.

Jabir matriculated to Siena College from Buffalo State, where he served as the head coach of the Saints for three seasons (1987-90) and compiled a 50-29 record. Jabir's teams posted three consecutive winning seasons. In his first season, Jabir was responsible for the development of Siena's first-ever Freshman All-American.

After his stint at Siena, Jabir spent six years at Marquette University becoming one of the most successful coaches in the history of the program, elevating the Golden Eagles into the national spotlight. After posting a 7-20 record during his inaugural year (1990-91) at Marquette, Jabir guided his team to four consecutive winning seasons, two 20-plus winning seasons and three post-season appearances, including back-to-back bids to the NCAA Tournament. In 1994-95, Marquette won the Great Midwest Conference Tournament, the first tournament championship in school history. This followed the 1993-94 campaign in which Jabir compiled a program-best 22-7 overall record and its first trip to the NCAA Tournament. Jabir was also a two-time Reebok/Great Midwest Conference Coach of the Year while at Marquette.

Jabir then left to take the helm of Providence College for six seasons, 1996-2002. During his last three years, the Friars' record improved with each season and in his final season, the Friars finished 13-15 overall and eighth of 14 schools in the prestigious Big East, its highest finish ever since the Big East went to a one division format.

After Providence, he spent one season as an assistant at Colorado. In his last season at CU, the Buffaloes (24-8) advanced to the Sweet Sixteen of the NCAA Tournament and were ranked as high as 23rd in the ESPN/Coaches' Poll and 24th in the Associated Press Poll. Jabir was primarily responsible for the development of CU's post players, including the Buffaloes' first-ever First Team All-Big 12 selection.

He is currently the head coach of the Dayton Flyers.

Jabir is a 1984 graduate of Nazareth College in Rochester, New York, where he received a degree in English. He also earned his Masters degree in Student Personnel Administration from Buffalo State in 1986. Jabir and his wife Kathy have three children, Lauren, Shane and Jackson.