Simon Black arrives at Marquette after spending the last six years as an assistant coach at Towson, Notre Dame and the University of California-Berkeley. She helped Towson and Notre Dame to a combined four NCAA Championship appearances and is set to begin her first season at Cal where she works with the Golden Bears' attack and goaltenders.

At Notre Dame from 2008-10, she helped the Irish to a 39-19 record in three seasons, including the 2009 BIG EAST Championship and three NCAA Championship appearances. Simon Black coached four all-Americans (Jillian Byers, Gina Scioscia, Caitlin McKinney and Shaylyn Blaney) during that time and oversaw the 2009 team that set school records for goals (321), assists (150) and points (471), while claiming the BIG EAST title and advancing to the quarterfinals of the NCAA Championship.

She took her first coaching job at Towson in 2005 after a standout career as a student-athlete at Notre Dame, and helped the Tigers to their first Colonial Athletic Association (CAA) title and NCAA Championship berth in school history. Following three years at Towson (2005-07) under head coach Missy Doherty, Simon Black returned to her alma mater as an assistant under Tracy Coyne, for whom she played as an undergraduate. 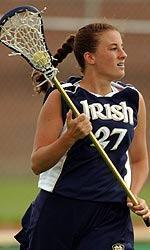 During her playing career at Notre Dame, Simon Black helped the Fighting Irish to the first two NCAA Championship appearances in school history in 2002 and 2004. She was also the school's first student-athlete to be named an Intercollegiate Women's Lacrosse Coaches Association (IWLCA) First Team All-American in 2004, while setting the then-Notre Dame single-season scoring mark with 74 points on 46 goals and 28 assists. Simon Black led ND to the NCAA Tournament that season and became the first ND player nominated for the Tewaaraton Award, honoring the nation's top player.

Simon Black graduated from Notre Dame with a bachelor's degree in American studies in 2004 and was a four-time dean's list selection.

Started 13 of 14 games during the 2001 campaign … scored eight goals with one assist for nine points … was fifth on the team with 39 shots on goal … recorded six ground balls and had 14 draw controls …scored first collegiate goal versus Denver … had three-point game (2g, 1a) at Ohio University … scored a pair of goals versus Georgetown … closed the season with three goals in the win over Ohio State.

Started all 18 games during the season … was third in goals (28) and fourth in points (34) … was also fourth with 62 shots on goal … had a .452 shooting percentage … collected 37 ground balls, caused 11 turnovers and had 14 draw controls … Notre Dame's top scorer in NCAA tournament with five goals and two assists in games versus Ohio State and Princeton … had 10 multiple-point games and nine games with two or more goals … recorded five-point game (3g, 2a) in NCAA first round game versus Ohio State … had four games with three goals (Virginia Tech, Connecticut, Yale and Ohio State) … had a six-game scoring streak (13g, 2a) between March 30 and April 14.

Started all 15 games for Notre Dame … was second on the Irish in scoring with 27 goals and 14 assists for 41 points … ranked third in ground balls (31) and second in draw controls with 29 … second on the team with 67 shots on goal … first-team all-BIG EAST selection and second-team Brine/IWLCA all-Mid-Atlantic region selection … had 12 multiple-point games during the season and nine games with two or more goals … had career-best seven-point game (3g, 4a) in 19-4 win at Ohio University … turned in career-high four-goal game (also had two assists for six-point game) in 16-13 win at Virginia Tech … turned in three, three-goal games vs. Ohio, Syracuse and Connecticut … had four games with two or more assists, including career-high four-assist game vs. Ohio University … goes into the 2004 season with an 11-game point-scoring streak (22 goals, seven assists) … had career-high five ground balls versus Yale at Orlando, Fla. … recorded five draw controls in 13-6 win at Rutgers.

Daughter of Robert and Deborah Simon … has one brother, Eric (`03), who was captain of the Notre Dame men's lacrosse team in 2003 … father Robert played football at WPI … born Feb. 27, 1982, in Ridgewood, N.J. The former Meredith Simon married Adam Black in October of 2010.