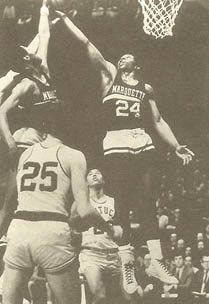 Thompson's #24 is retired by Marquette, however Marquette now says they only retire jerseys. Early in the 2006-07 season, Lazar Hayward was wearing #24 - and when George found out, he was irate about the apparent disrespect. Marquette quickly answered that they were sorry about the confusion, and Lazar switched to wearing the #32 jersey to avoid any conflict.

Known as “Brute Force,” Thompson was Al McGuire's first great player. Despite being 6'2” George was primarily an inside force. He led Marquette in both scoring and rebounding during the 1967-68 season and was named team captain during the 1968-69 season, when he led the team in scoring again.

George also spent 27 years in the broadcast booth calling games for Marquette after his playing days were over. 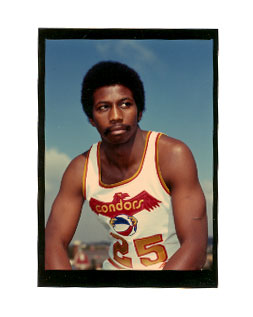 Thompson was drafted by the Minnesota Pipers in the second round of the 1969 ABA draft and chose to sign with them over the Celtics, who selected him with the 66th overall pick (fifth round) of the 1969 NBA draft. Minnesota relocated to Pittsburgh before Thompson's rookie season. Thompson was also a first round draft choice of the Memphis Tams in the 1972 ABA dispersal draft, following the dissolution of the Florida and Pittsburgh franchises. He would end his professional career back in Milwaukee with the Bucks.

George Thompson earned three letters as a member of the Marquette University basketball program (1966-69) and held the program’s all-time scoring record until 2009. Thompson averaged 20.2 points per game during his career, tops all- time at Marquette, and helped Marquette a record of 68-20 during his three years. When he concluded his college career, he held the school’s career mark in field goals (656) and free throws (457). His 664 points during 1967-68 still holds up as the highest seasonal mark by a school junior. He led the team in scoring his final two years and was selected as an All-American in 1968-69. His jersey (#24) is retired and he was chosen to the NABC 1994 Balfour Silver Anniversary All-America Team. He went on to play for Memphis and Pittsburgh in the American Basketball Association and for Milwaukee in the NBA. Inducted in 1980.