The Schoolyard Tavern on Southport and School in the Lakeview neighborhood calls itself “Chicago's Offical Hangout for Marquette Alumni.” It is by far the best place in Chicago (and maybe the best bar anywhere) to watch a Marquette game. It is big, has great drinks specials, tremendous bar food and best of all is totally devoted to Marquette on game days. They even have plastic beer mugs with the Marquette logo on them for games and have drink specials and Marquette related prizes throughout the games. It's usually packed with Blue and Gold and the game is on every TV and the audio for the game is played over the audio system. Only drawback is sometimes it gets TOO crowded with Marquette fans, if you can consider that a drawback. http://www.schoolyardtavern.com/

Finley Dunne's in the Lakeview area is a great place to go for Marquette games. Finley Dunne's supports many midwestern Catholic universities like Marquette, Loyola-Chicago, Dayton, Creighton, etc. Their website says they are also now a home base for Louisville Cardinal games. They have an excellent set of bartenders and waitstaff, and the bar food is outstanding. It's just off the intersection of Lincoln and Paulina and can be accesed easily by the Brown Line Paulina Stop. Only complaint is that is is a little small, but they will accomodate Marquette fans. A good “second option” to the Schoolyard. If there's a Dayton or Louisville game going on you would definately be in the minority as a Marquette fan. http://www.finleydunnes.com/ 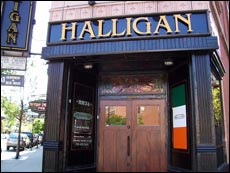 Halligan Bar is located in the Lincoln Park neighborhood of Chicago. It is at the corner of Belden and Lincoln, just south of Fullerton and within walking distance of the Fullerton Red and Brown Line stops on the El. Through the 2002-2003 season this was the #1 bar in Chicago for Marquette games. They draw a large Notre Dame crowd as well, but still have a lot of Marquette memorabilia up in the bar. After the Final 4, the owners of Schoolyard Tap contacted the Marquette Club of Chicago and convinced them to support having the Schoolyard Tap as the official “Marquette Bar” in Chicago. This kind of left the Halligan Bar out in the cold, which was too bad because they supported Marquette from the day they opened and were great to Marquette fans. During the 2003 road to the Final 4 there would literally be a line down the street to get into Halligan Bar. If you're in the neighborhood on game day stop in and they'll be happy to make sure to get the Marquette game for you. http://www.halliganbarchicago.com/