Carl played his high school ball under Doug Milestone at Buffalo Grove High School, where he received the Jim Henderson Award, recognizing the school's top athlete. He set a school record with 23 points in one quarter and recorded 29 points, eight rebounds, six assists, and three steals in one game as a senior. Carl also was an all-conference honoree in football as a senior, earning special mention following his senior football campaign. Carl was also awarded the 1993 Practical Arts Student of the Year at Buffalo Grove High. 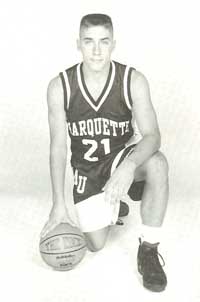 Carl walked on as a freshman and was the pride of McCormick Hall.

Coach Kevin O'Neill on Carl Hren- ”Carl will play an important role on this year's team. We will count on him to support the other players and help the team improve overall.“