A native of Chateaugay in upstate New York, Kevin O’Neill - born January 24, 1957 - coached at Marquette from 1989-1994. At Marquette, “K.O.” had an 86-62 record. He earned Great Midwest Conference Coach of the Year in 1993 and 1994 as his teams led the nation in defensive field goal percentage. His 1994 team was the Great Midwest Conference champion and reached the Sweet 16 of the NCAA tournament. 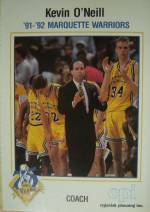 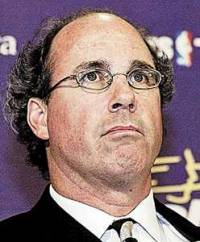 For the 2000-01 NBA season, O’Neill named as an assistant coach to Jeff Van Gundy with the New York Knicks. He then became an assistant coach to Carlisle for two seasons (2001-02, 2002-03) in Detroit as the Pistons posted back-to-back 50-win seasons and established themselves as one of the premier defensive teams in the NBA. Prior to the 2003-04 season, the two good friends went separate ways as Carlisle was named the head coach of the Pacers and O’Neill became coach of the Raptors. After an unsuccessful season as the Raptors' head coach, he reunited with Carlisle in Indiana as an assistant coach for two seasons and then as a consultant for one season.

When Lute Olsen took a leave of absence from Arizona, he tabbed O'Neill (a former assistant under Olsen) to be the interim head coach for the 2007-08 season and his eventual successor to the Arizona program. But a 19-15 record and 7th place finish in the Pac-10 (Arizona's worst finish since 1983) irked Olsen and O'Neill was removed and assigned to help fundraising efforts for the university.

Despite the difficult season and demotion, O'Neill found his way to the NBA as a Memphis Grizzlies assistant for the 2008-09 NBA season.