A four-year starter at Whitney Young … Four-time All-Chicago Public League Red-West honoree … The Dolphins were 61-3 during Henry's junior and senior seasons … Whitney Young won the Illinois Class AA state title in 1998 and finished the season ranked second in the USA Today national poll … Averaged 13.7 points and 4.0 assists during senior season … Also shot 48.9% from the floor and 71.2% from the charity stripe … Nominated for McDonald's All-American game … Earned honorable mention acclaim on the USA Today All-USA team … A member of the Chicago Tribune's all-state second team … Earned honorable mention on the AP all-state team … Played in the Chicago City-Suburban all-star game and the Kentucky Derby Classic … Averaged 16 points and 4.2 assists as a junior … Also shot 49.8% from the field and 71.2% from the free throw line in 1996-97 … Led the Dolphins to the quarterfinals of the Illinois Class AA state tournament … Coached by George Stanton 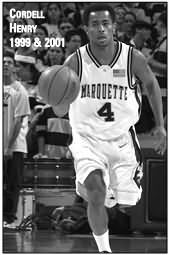 Finished his career playing in 120 games, 110 in a starting capacity … Posted 64 games of double-figure scoring including 18 contests of 20 or more points … Holds down the No. 1 spot on the school's career chart for assists in C-USA games with 244.

Ended the year as the team's No. 2 scorer against Tulsa (Mar. 14) in the NCAA Tournament with 17 points … Landed a second-team berth on the Conference USA All-League Team … Named to the Conference USA All-Tournament Team after averaging 20.7 points and 4.7 assists per outing over three games … Hit nine-of-18 from the floor and finished with a team-best 24 points, 15 in the second half, vs. Louisville (Mar. 7) … Followed that effort by sinking nine-of-16 field goal opportunities and registering 27 points (tying second-highest output of the year) vs. Houston (Mar. 8) … Scored in double digits in 26 games during the season and had nine contests of 20 or more points … Paced the team in scoring in eight games this year … No. 6 among C-USA players in free throw percentage in overall games (.830) and was No. 4 in league contests (.860) … His 83.0 percent effort from the foul line was fifth highest on the school's seasonal list for seniors … Hit three treys and finished with 13 points (team's No. 2 scorer) vs. Cincinnati (Feb. 22) … Nine-of-14 from the floor and registered 22 points vs. Charlotte (Feb. 19), 19 of which came in the second half … Posted a game-high 23 points vs. Louisville (Feb. 16) … Scored all of his game-high 21 points in the second half vs. Southern Miss (Feb. 9) … 50 three-point field goals ranked him No. 7 on MU's seasonal ladder for seniors … Converted a career-high nine free throws against USM … 20-point effort (team's No. 2 scorer) vs. Cincinnati (Feb. 2) … 17-point performance (team's second-high scorer) vs. Tulane (Jan. 29) … Team-best 17 points vs. Saint Louis (Jan. 26) … Dished out a season-high nine assists (third-highest career total) against TCU (Jan. 23) … Outstanding game vs. DePaul (Jan. 19), knocking down a career-high tying 10 field goals in 16 attempts, including three-of-five from three-point range, and finishing with 27 points – second high on the team, his second-highest total of the year and third of his career … Ended the year No. 9 among C-USA players in overall scoring (15.2 ppg) and finished No. 11 in league contests (15.1 ppg) … Big effort vs. UAB, hitting eight-of-14 from the floor and finishing with a team-best 21 points … No. 13 among C-USA players in assist/turnover ratio (+1.41) and three-point field goal percentage (.376) … Eight points and forced a key five-second call late in the Louisville game (Jan. 9) … Sank all three of his three-point field goal attempts and finished with 11 pts. vs. Charlotte (Jan. 5) … Doled out seven assists against Morris Brown (Jan. 2) … Team's second-high scorer with 16 points (14 in second half) vs. Wisconsin (Dec. 22) … Notched 14 points and recorded a season-high six rebounds, along with a career-high tying five steals, against Arkansas-Pine Bluff … Claimed nine games of two or more steals … 7-of-12 from floor and finished with 14 points (2nd high on team) vs. Dayton … MVP of the Blue and Gold Coca Cola Classic after averaging 14.5 points and shooting 56.2% from the floor (13-of-23) … Totaled 16 points, second high on the team, vs. Sam Houston State … Shot 50% or better from the floor in 17 contests… Notched a career-best 31 points, 23 in the first half, vs. Chicago State … 18 points vs. Tennessee was second on the team … Hit a career-best 75% from the floor (9-of-12) in the Chicago State game … Six treys vs. Chicago State was a career high … Career 77.9% career free throw shooter (262-of-336).

Started the last 28 games of the year en route to his second letter … Ranked third on the team in scoring with a 9.1 points per game average * Tops on the club and finished 10th among C-USA players in assists (3.52 apg) * His 102 assists represented the ninth-highest total by an MU sophomore * Finished No. 2 in C-USA in assists/turnover ratio in league games (+1.63) … Led or shared for the squad's lead in assists category on 22 occasions * His 35 steals were tops on the team and 10th most by an MU sophomore * Enjoyed 10 performances of two or more steals * Made 22 of his last 24 free throw attempts (.917) and ended the year as the team*s leader in free throw percentage (.800) … Scored in double figure in four of the last five and in a total of 12 games * Shot 58.8 percent (20-of-34) from the floor and averaged 17.3 points over the final three games * Closed out the year with at least one trey to his credit in the team*s last eight contests, tops on the club in that stretch - Came up with a then career-high 26 points (21 in the first half), hitting a career-best 10-of 15 from the floor (three treys) against Xavier (Mar. 15) in the NIT * His 21 first-half points against the Musketeers was the season's highest-scoring effort for an opening half of play by a Golden Eagle player - Also chalked up a season-high four steals in the NIT game, tying the best effort by a MU player during the year - Huge game against No. 21-ranked DePaul (Jan. 8), leading the team in scoring with a then career-high tying 21 points … Sank seven-of-10 field goals against the Blue Demons including four treys that tied a career best - Went six-of-10 from the floor and knocked down four treys, tying his career best, en route to 16 points vs. Houston (Mar. 8) … Also doled out four assists and had no turnovers vs. the Cougars in 24 minutes - Registered a 14-point effort vs. Southern Miss (Feb. 2) while finishing with three assists and no turnovers in 31 minutes … Squad's second-high scorer with 14 points against Memphis (Feb. 26) and sank a career-high six free throws against the Tigers *Totaled 17 points, third-highest effort of the season, against UNC Charlotte (Jan. 29), sinking seven-of-15 from the field (three treys) * Eight points, and four rebounds against Xavier (Jan. 2) and hit a big three-pointer with 1:09 left against that tied the game at 62-62 before scoring the go-ahead bucket with 49 ticks on the clock * Named MVP of the Blue & Gold Coca-Cola Classic (Dec. 3-4) after averaging 14.0 points and 4.0 assists in wins over Western Michigan and Appalachian State, respectively * Grabbed a then career-best seven rebounds against No. 3 Cincinnati (Jan. 8) * Six-assists performance against Wofford (Nov. 27) * Played a season-long 37 minutes and tallied nine points vs. DePaul (Feb. 16) with all of his points coming on three treys * Five assists vs. No. 25-ranked Louisville (Jan. 15) in a 66-64 overtime win * Came off the bench in the season opener vs. Chicago State (Nov. 20) and had 11 points.

Played in all 29 games and made 20 starts … Groin injury in season opener affected his play the remainder of the campaign … Played just four minutes in games 2-4 … Played 30 or more minutes in 18 games, including the last seven … Scored in double figures in nine games, including a then career-best 21 against Tulsa (Dec. 5) … Reached double figures in four of the last five games of the season … Averaged 3.2 assists, seventh best in C-USA … His assists average in league games (3.6) was third best in C-USA … His 93 assists were third most by a Marquette freshman … Named to Blue & Gold Coca-Cola Classic All-Tournament Team after averaging 16 points and shooting 77.8% from free throw line against Cornell (Dec. 4) and Tulsa (Dec. 5). 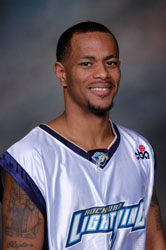 After Lightning organization folded, Henry went to the Venezuelan league. He scored a game high 30 points on a 9-of-18 performance from the field and connecting on 10-of-10 free throws in his first game as a member of the Guaros de Lara of the LPB (Liga Profesional de Baloncesto). The 5-foot-11 former Lightning guard played in his first game on a Sunday after arriving in Venezuela that day. He scored 42 points in a playoff victory and be named Semi-Finals MVP. But his Guaros would lose to the Trotamundos de Carabobo, 75-65, in the Finals behind Henry's 33 points. 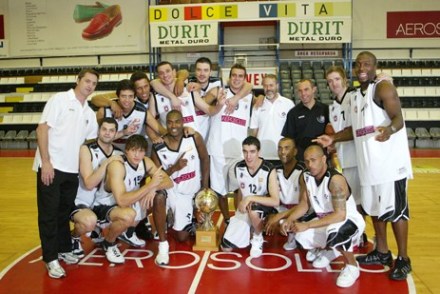 Cordell Henry played for the Ovarense Aerosoles in Portugal which finished the regular season 27-5 and won the 2006-07 UZO Liga Championship (beating Porto, four games to three). In the final game, Henry scored 9 points as his team defeated Porto, 75-68.

During the 2007-08 season, he tallied 38 points in a Eurocup match for Ovarense versus Köln 99ers; he shot made 12 field goals including 5 treys and hit 9 out of 10 from the charity stripe. His performance ranks as the 7th All-Time Individual scoring efforts in Eurocup history.

Henry suited up for the Marinos de Anzoategui of the LPB for the 2008 summer season.

Cordell played the remainder of the 2008 season with Halcones UV Córdoba of the Mexian LNBP.