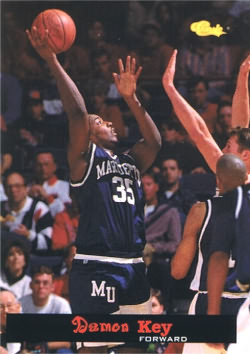 Damon Key starred right down Wisconsin Avenue from Marquette University at Marquette University High School, where he led the Hilltoppers to the 1989 WISAA State Championship and the 1990 WISAA State Championship Runner-Up. From 1987-1990, he scored 1,266 points (527 coming in his senior year). In 1989, his junior year, he was placed on the AP All-State Fourth Team. In 1990, his senior year, he was selected to the AP All-State Team as well as the Wisconsin Basketball Coaches Association State Player of the Year, also known as “Mr. Basketball” of Wisconsin.

Damon won a silver medal playing on the North team in the 1990 U.S. Olympic Festival in Minneapolis. Damon also played for the Vic Tanny Warriors AAU team (along with future MU teammate Jim McIlvaine), that placed second nationally in 1989 and fifth nationally in 1990 AAU competition. Damon was invited to participate at the Nike ABCD Camp prior to his senior year and was named an All-Star at the prestigious Five-Star Basketball Camp that same summer.

In 2005, he garnered 38 votes from the Milwaukee Journal Sentinel All-Time State High School Basketball committee voters. In the Milwaukee Journal Sentinel article, former Whitefish Bay Dominican head coach Gregg Trojanowski reminisced about Key: “Outstanding, dominant. Probably one of the best big men in the area. Brute force, physically mature. Because he was so strong, he was a good scorer.” JS Online Story 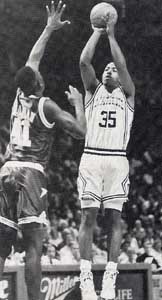 Paced Marquette in scoring as a freshman (13.2 ppg). Was the first Marquette freshman to lead his team in scoring since 1951-52. Had a season-high of 26 points against Notre Dame, hitting on 11 of 14 field goal attempts. Key registered 22 double-figure scoring games and three 20+ point games.

Served as team tri-captain and led Marquette in scoring again as a sophomore (13.6 ppg). Had the third-highest single season field goal percentage in school history (57.7%). Ranked 10th on the GMC scoring list and ninth in free throw percentage (75.5). Had 24 double-figure scoring games, leading the team 12 times in that category and 10 times in rebounding. Connected on 12 of 12 foul shots against Mississippi Valley State on December 17th and pulled down 13 rebounds against North Carolina State on February 4th.

Damon served as team tri-captain again and led the Warriors and the GMC in free throw percentage (86.9%) during his junior season. Ranked 13th in scoring (13.6), eighth in rebounding (5.7) and sixth in field goal percentage (51.5%) in the GMC. Damon was also named the MVP of the 1992 First Bank Classic. Key scored 32 points against UNLV on December 26th and scored his 1,000th career point against South Florida on February 2nd. Key led the team in scoring (18) and rebounding (11) in their first-round loss to Oklahoma State in the 1993 NCAA Tournament. Key scored in double figures 20 times as a junior, leading the team in scoring seven times and rebounding six times.

Key served as team tri-captain for the third consecutive year and was one of 25 players in the nation who was given serious consideration to become a finalist for the 1993-94 John Wooden Award. In the second round game of the 1994 NCAA Tournament, Key led the sixth-seeded Marquette Warriors to an upset over a dominant third-seed Kentucky Wildcats team, 76-63. Key registered 37 minutes in the contest and tallied 25 points on 9 for 17 shooting from the field. He was also perfect from the line (7 for 7), grabbed six rebounds, had two assists and one blocked shot. Damon was the 24th player to score 1,000 points in school history and was the 13th player in school history to score 1,000 points and grab 500 rebounds. Damon led Marquette in scoring with a 15.6 ppg average.

In 1994, he was selected in the 1st round (#12 overall) of the USBL draft by the Shreveport Crawdads. In his rookie year, he played games, averaging ppg and rpg. 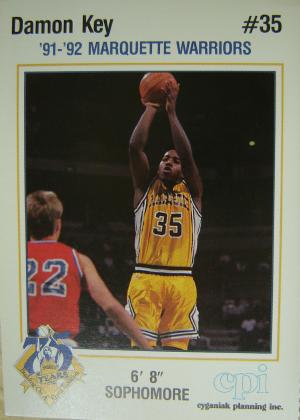