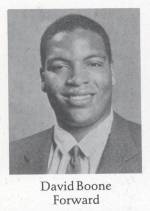 David led Marquette in scoring and rebounding during the 1985-86 and 1986-87 seasons. He was also named team captain during his senior campaign.

After Marquette, Boone was selected in the fourth round of the 1987 NBA Draft - the 77th overall pick - by the Denver Nuggets. He was selected before future NBAers Jack Haley (4th/UCLA), Dave Popson (4th/UNC), Ronnie Grandison (5th) and Sarunas Marciulionis (6th).

He was an inaugural member of the Calgary 88's in the World Basketball League. His 88's reached the league finals three times. Despite never winning a title, the 88's recorded the league's best regular season record three times: 1988, 1989, and 1991. In their only five seasons, the team record went 151-78.