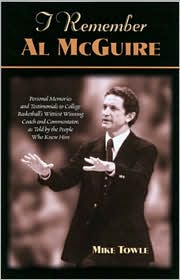 Full Title: I Remember Al McGuire: Personal Memories and Testimonials To College Basketball's Wittiest Winning Coach and Commentator, As Told By the People Who Knew Him

Book Description
For three decades, Al McGuire was the heart and soul of college basketball, first as the street-smart head coach at Marquette University and later as the hoops-savvy television analyst whose unique mix of humor, candor, and uncanny insights brought a whole new dimension to sports broadcasting. McGuire was the consummate professional at whatever he did. Possessing an impeccable insider's knowledge of the game, he was able to communicate to viewers in ways that were as entertaining as they were informative. He made people laugh, he could laugh at himself, and his joy for the game and people in it made him one of sports' most enduring icons.

McGuire passed away at the age of seventy-two in early 2001 after a long illness, leaving behind a basketball-rich legacy that had its poetic qualities as well. Never was that more evidnet than in the 1976-77 season, when McGuire announced to his team in midseason that it would be his last year in coaching. The season ended with McGuire overcome by emotion, sitting down on the Marquette bench with tears streaming down his face as the Warriors gave their beloved coach the ultimate going-away present, a national championship. Thus ended a twenty-year coaching career in which McGuire completed a 405-143 record, including a 295-80 mark at Marquette.

In I Remember Al McGuire, the legendary basketball coach and announcer is remembered by dozens of associates, who offer their favorite anecdotes, insights, assessments, and other assorted memories of a basketball junkie as quick with a quip as he was with a word of encouragement. Among those contributing to this book are his former players and assistant coaches as well as other head coaches, media personalities, friends, and associates who knew him well at one time or another.

About the Author
Mike Towle is the author of several books in the I Remember Series, with Ben Hogan, Augusta, and the Masters, Walter Payton, Pete Maravich, Arthur Ashe, and Bobby Jones among his other subjects. A former sportswriter with the Fort Worth Star-Telegram and The National, Towle is president of TowleHouse Publishing and lives in Nashville with his wife, Holley, and son, Andrew.