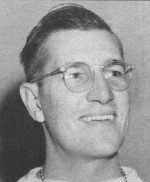 Before entering the coaching ranks Nagle attended school at Marquette University from 1936-1940 and played on the basketball team, lettering in '38/'39 and '39/'40. After graduating from Marquette Nagle enlisted in the United States Army Air Corps where he served from 1940-1944.

As a teacher at Whitefish Bay, Nagle taught English and coached basketball. In the 80's Nagle served as a scout for the Cavaliers and Mavericks of the NBA. He also served as commissioner of the CBA and published the book “Power Pattern Offenses for Winning Basketball”.