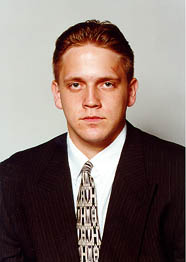 Lovette was a four-year starter and three-time All-Dairyland Conference honoree for Randy Storlie at Blair-Taylor. He was named the Winona Player of the Year as both a junior & senior and led Blair-Taylor to a 25-1 record and a trip to the state semi-finals during his junior year.

As a senior, he led Blair-Taylor to a 19-4 record and a trip to the regional finals in 1995. He averaged 21 points and 14 rebounds a game as a senior and was selected to the all-state first team. He was also named the Cooley Region Player of the Year. He also played on the Wisconsin select AAU team that participated in the 1994 national tournament.

Jarrod was named team co-captain, but his season was cut short in 1999 by “undisclosed medical issues.” Generally speaking, Jarrod lost his nerve to play basketball. With a 1999 loss to DePaul, the Milwaukee Journal had this to say about Lovette:

But on the bench, he grew pale, his lips chattered, and he hunched over, clutching a towel and breathing very hard. He looked as if he had the flu or a severe case of nerves.

After a 22-day, five-game absence for undisclosed medical reasons, Lovette, a senior, returned to practice Thursday. But this was clearly not the smooth comeback all had hoped for.

After halftime, Lovette remained in the locker room with a doctor, and MU officials would not let reporters ask him any questions after the game.

“I don't know what his status will be, but I thoroughly suspect that basketball is not going to be in his future – or for the remainder of this season,” said Deane, whose team dropped to 0-4 in Conference USA. “I could be speaking ahead of myself, but I just don't see Jarrod's return becoming easy.

” . . . He has medical problems. He will not be available for comment and he's not going to make any comments about it. It's a very difficult situation for both our basketball program and for him. ”

Has played in all 30 contests and made 14 starts … Has started in the last eight contests and nine of the last 10 … Marquette's leading rebounder in six contests … Turned in the best effort of his career with 19 points and 15 rebounds against Louisville (Feb. 20) … Was 13-13 from the free throw line, tying a school record for proficiency … That was his first career double double … Had five points and six defensive rebounds versus UNC Charlotte (March 8) in C-USA Championship game.

Jarrod played for the Elkhart Expres Pro team in 2007. http://www.elkhartexpress.com/roster.asp