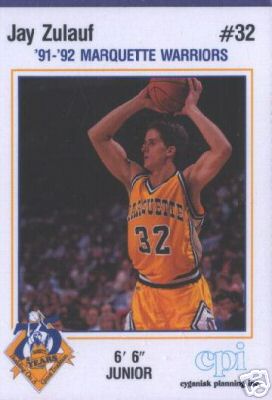 Jay averaged 19 points, 10 rebounds and three assists as a junior for Ed Peltz. As a senior, Zulauf averaged 24 points, 12 rebounds and four assists as a senior, shooting 63% from the floor and 88% from the foul line. He lead his Port Huron team to the state quarter-finals. Port Huron finished 25-2 and won conference, district and regional championships during Zulauf's senior season. His career high for Port Huron was 36 points. He also scored 33 points for the West squad in the Michigan Coaches Association All-Star game and averaged 14 points and eight rebounds in the Michigan/Ohio All-Star series.

Zulauf played in six games as a freshman at Bowling Green State University in Ohio, averaging 4.3 points and 1.6 rebounds for the Falcons. He was slowed by a bout of mononucleosis in January of 1988 and transferred to Marquette following his freshman year at Bowling Green.

Jay sat out the season, after transferring from Bowling Green State. Coach Kevin O'Neill on Zulauf- “A versatile player who will play different positionns for us. He will see time at different spots. Jay needs to become more consistent, but at the same time, really learned our system last year. I thinkn we can count on Jay to score some points and give us a boost no matter when he is playing or what position he is playing. he is an instant-offense type player.”

Ended the 1990-91 season scoring a career-high 19 points vs. St. Louis at the MCC Conference Tournament in Dayton…Made 6 of 10 FGs, 3 of 4 three-pointers and 4 of 5 FTs vs. the Billikens in 33 minutes…Played in 26 games, started the final two at Butler and St. Louis.