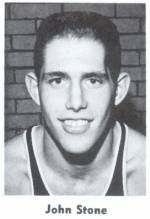 Has excellent moves in the pivot, find driving ability and a deadly jump shot from around the circle.

Started collegiately at Wisconsin but transferred to Marquette in his freshman year. Joined the Warrior varsity team midway through the 1961-62 season and played in eight games, scoring 22 points and grabbing 12 rebounds and filled in admirably as the Tribe's forces at center were depleted because of injuries.

Stone was named team captain during the 1963-64 season and averaged 11.6 points per game.