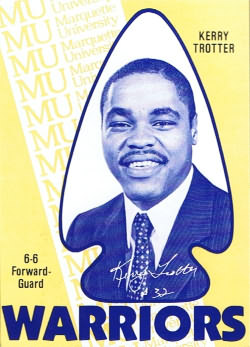 Trotter was one of the most heralded freshmen in Marquette's history. Named to Parade magazine's All-American team, he was also one of Street & Smith's “30 Best High School Stars” as a senior at Creighton Prep where he averaged 26.8 ppg and 10 rpg. During his senior campaign, Trotter shot 60% from the field and 83% from the charity stripe.

Trotter received the ultimate prep honor of being named a McDonald's All-American. In the McDonald's Classic, he scored 14 points and dished out 6 assists. He is still the only McDonald All-American to hail from Nebraska.

Elected to Nebraska High School Sports Hall of Fame in 1998.

After going unselected in the NBA draft, Trotter played overseas in Brussels, Belgium for Castos Braine. In his first five seasons, he averaged nearly 30 ppg and was named the league's MVP twice. Trotter was such a sensation in Belgium that Nike signed him to a deal, supplying him gear and shoes, and even printed Kerry Trotter posters!

On playing overseas: “For me the NBA draft didn't work out and I was disappointed at the time, but going overseas? It was, a “Why not?” But if it didn't work overseas, I got my degree. So there was no pressure on me to play well.” Omaha World-Hearld Article