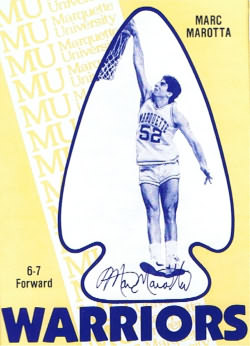 Despite the demands of basketball, his academic achievements were numerous, among them being named to the Dean's list for at least five consecutive semesters and to Alpha Sigma Nu, the Jesuit Honor Society.

Marc Marotta was drafted by the New York Knicks in the ninth round of the 1984 NBA draft. Instead of pursuing basketball, mark chose to study law at Harvard University. He is now a partner in the Transactional & Securities and Public Affairs Practices withe Foley & Lardner. Marc also spent some time as the secretary of the Department of Administration under Governor Jim Doyle. The link to his bio from Foley & Lardner is attached.