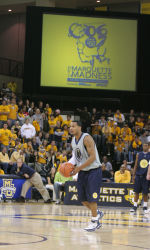 The men's and women's basketball team kicked off the 2006-07 season on Friday, October 13 at the near capacity Al McGuire Center with Marquette Madness. The night was highlighted by the dunk and 3-point contests put on by the men's squad.

Judged by a panel of ex-players, Wesley Matthews was named the winner of the dunk contest, while freshman, David Cubillan out shot teammate Maurice Acker for the 3-point title.

Madness marks the first official day that teams can practice this season.