In addition to playing basketball at Madison Memorial, Wes was a star soccer player as well.

Earned MU's Most Improved Player Award and “White Line Committed”/Defensive Player of the Year Award … Marquette's all-time leader in free throws made (549) and ranks eighth all-time in scoring (1,673) and third in games played (127) … Named Second Team All-BIG EAST … One of 30 players named to the John R. Wooden Award mid-season watch list … All-time leader at MU in career free throws made … Became the 22nd player in MU history to combine for over 1,000 points and 500 rebounds … Recorded 27 points and a career-high eight assists vs. Houston Baptist (11/14), while shooting 11-of-12 from the free throw line and 7-of-11 from the field and grabbing five rebounds and five steals … Netted seven field goals for the eighth time in his career and went 10-of-10 from the charity stripe and 2-of-2 from beyond the arce en route to scoring a team-high 26 points and grabbed a career-best nine rebounds vs. Chicago State (11/17) … Netted a career-high eight field goals on 16 attempts and went 9-of-10 from the foul line to finish with 25 points, including seven rebounds, vs. Milwaukee (11/22) … Contributed 13 points, six rebounds, three assists and three steals vs. Texas Southern (11/25) … Tallied 17 points and seven rebounds vs. Northern Iowa (11/28) … Shot over 58 percent from the field (7-of-12) and 14-of-17 from to score 28 points vs. Dayton (11/29); also grabbed seven rebounds against the Flyers … Named to the Chicago Invitational all-tournament team after averaging 21.0 points and 7.3 rebounds in four games played … Went 10-of-10 from the free throw line and led the team in scoring with 18 points vs. Central Michigan (12/2) … Matched a season high with nine rebounds and scord 13 points with four assists vs. IPFW (12/13); also recorded a career-high, and team individual season-high, three blocks against the Mastodons … Knocked down three 3-pointers in the first half and scored 20 of his career-high 30 points in the second stanza vs. Tennessee (12/16); went 15-of-18 from the foul line against the Vols, becoming the first MU players since Brian Wardle in 1999 to make at least 15 foul shots in a game … Chipped in 18 points, in addition to five assists, four rebounds and two steals vs. Western Carolina (12/19) … Scored 21 points with six rebounds and three assists vs. Presbyterian (12/28) … Was 5-of-6 from the field and 8-of-10 from the foul line and scored 16 of his 19 points in the second half vs. Villanova (1/1) … Added 17 points, six rebounds and four assists vs. Cincinnati (1/4) … Was a perfect 10-of-10 from the field en route to scoring a game-high 23 points at Rutgers (1/7), in addition to six rebounds, two steals and a block; his 10 field goals were a career high … Scored 13 points and a was 7-of-7 from the foul line vs. West Virginia (1/10) … Named to the BIG EAST Honor Roll on Jan. 12 … Scored 22 points vs. Providence (1/17) … Notched 14 of his 20 points in the first half vs. DePaul (1/24) … Scored 19 of his 23 points in the second half and grabbed a team-high seven rebounds vs. Georgetown (1/31) … Tallied 20 points on 8-of-10 shooting from the field and was 4-of-4 from the foul line at DePaul (2/3) … Shot 5-of-6 from the field and totaled 16 points at Villanova (2/10) … Led MU with a game-high 24 points vs. Seton Hall (2/17) … Netted a game-high 23 points, including 18 in the first half, and finished with a career-high five 3-pointers at Georgetown (2/21) … Scored 20 points vs. UConn (2/25) … Led MU with a game-high 19 points at Louisville (3/1) … Added 16 points, four rebounds and four assists at Pittsburgh (3/4) … Tallied his first career double-double with 14 points and a season-high 12 rebounds while playing in a career-high 44 minutes vs. Syracuse (3/7) … Produced his second career double-double and second in three games with 11 points and 10 rebounds vs. Villanova (3/12), in addition to four assists and team-high two blocked shots … Finished with 11 points and eight rebounds, including a team-high three offensive boards, vs. Utah State (3/20) … Recorded 24 points, seven rebounds and two steals while going 8-of-9 from the foul line vs. Missouri (3/22) … earned fourth letter. 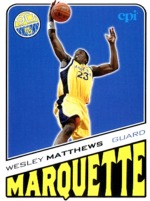 Played in 23 games for the Golden Eagles making 13 consecutive starts before suffering a stress fracture in his right foot …Averaged 9.0 points and 4.0 rebounds per game … After returning to play, he average 7.4 points, 3.2 rebounds in 23.0 minutes per game … Was fourth on the team in scoring average with 9.0 points per game, second on the team from long range making 43.8 percent of his attempts … Scored seven points in 15 minutes in collegiate debut against Rice (Nov. 18) … Added 11 in Pepsi Blue & Gold Championship on 4-of-7 shooting against Winthrop (Nov. 19) … notched his second concsecutive double digit point performance contributing 12 points in 17 minutes against Eastern Washington (Nov. 23), including eight points from the free throw line … registered career highs in points (18), rebounds (7) and free throws (9) at Nebraska (Nov. 30) … went to the free throw line 11 times at Nebraska converting a game high nine of his attempts … grabbed six steals against South Dakota State (Dec. 3), a season high by any Marquette individual … played a season high 32 minutes against Valparaiso (Dec. 7) … led Marquette in steals for the second consecutive game with four against Valpo … dished a season high six assist against Valpo … held scoreless in the first half for the first time all season at Wisconsin (Dec. 10) … Was perfect from the charity stripe making all four of his attempts at Wisconsin … matched a season high seven rebounds against San Francisco (Dec. 17) … led Marquette in assists agaisnt San Francisco with three … Led Marquette with a career best 21 points against Oakland (Dec. 19) … set career bests in in field goals (7), field goals attempted (12), three pointers (3) and three-point attempts (4) … His 15 second half points were the best MU individual total for a second half … his 21 points made him the fourth different player to score 20 or more points for Marquette this season … Led Marquette for the second consecutive game with 12 points against Delaware State (Dec. 22) … Was perfect from the free throw line for the fifth time this season making all four of his attempts against Delaware State … Topped his previous career best seven rebounds with 13 against Lewis (Dec. 28) … Came off the bench to play in his first game against St. John's (Feb. 1) since Lewis (Dec. 28) after suffering a stress fracture in his right foot … Saw 17 minutes of action against St. John's and dished a team high four assists … He had one assist and one rebound in his first shift of four minutes against St. John's …. Came off the bench to score four points making both of his attempts at Villanova (Feb. 4) … Came off the bench and recorded nine points and four rebounds leading all bench scorers at Rutgers (Feb. 12) … scored the Golden Eagles' only two bench points against Georgetown (Feb. 16) … led the bench in scoring with 13 points against Pittsburgh (Feb. 18) for the fourth straight came since he came back from injury … His 13 points marks the first time since December he has scored 10 or more points … made his second most field goals (five) this season against Pitt … Accounted for all of the bench scoring at Louisville (March 1) scoring 10 points … was near perfect from the field making seven of eight attempts for 18 points against Providence (March 4) … with his 18 points he tied his second highest point total of the season and his largest since returning from a mid-season foot injury … Gave the Golden Eagles a huge spark off the bench against Georgetown (March 9) scoring 14 points and grabbing six rebounds … six of his points came at the charity stripe, the most times he has converted from the free throw line since coming back from injury.

A free-agent invitee to training camp, Matthews earned a spot on the opening-night roster being a regular starter during the preseason campaign. He concluded the eight-game slate averaging 8.1 points, 1.3 rebounds and 1.1 steals per game while shooting 44.4 percent from behind the 3-point line and 88.5 percent from the charity stripe. 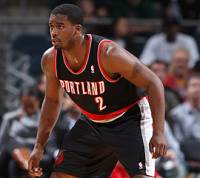 After a successful rookie campaign as an undrafted rookie who played in all 82 regular season games - plus the playoffs, Matthews signed a five-year, $34 million contract to play with the Portland Trailblazers. Though the Utah Jazz had the opportunity to match the offer, they chose not to do so.

He will be wearing the #2 jersey for the Trailblazers in the upcoming season. 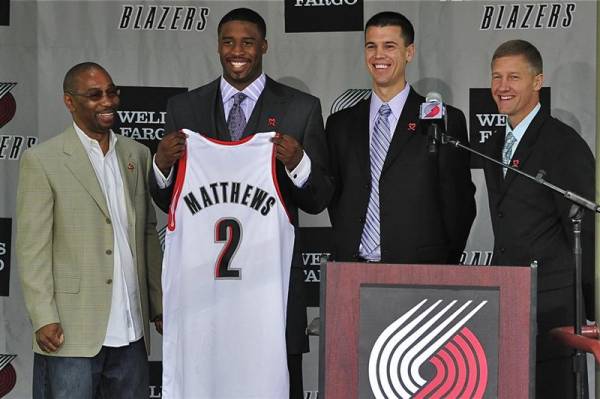 Son of Pam Moore and Wes Matthews…mother was a two-sport athlete and track standout at the University of Wisconsin and was inducted in to the school's hall of fame in September 2006…father played basketball at Wisconsin and spent nine years in the NBA with six different teams….majors in advertising.