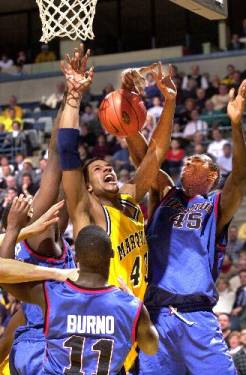 Oluoma was the only player under the age of 19 who was a member of the 1997-98 Swedish national team. He also played for the Swedish junior national team. He played for Fyrishov during the 1996-97 season and Sallen Basket the following year. Sallen Basket competed in the A1 league in Sweden. He was the 1996-97 Rookie of the Year in the Swedish Basketball League. His high school team won the Swedish title in 1996-97 and 1997-98. Nnamaka attended Newton High School in Newton, Kan. during the 1995-96 school year and averaged 19.6 points and 11 rebounds that season.

- Played in 25 games and started 19 times … A back injury limited his playing time in the early portion of the season … Started the last 15 games of the season … Had eight double-figure scoring games, including season-high 17 versus Louisville (Jan. 13) … Marquette's top rebounder on team-high seven occasions … 52.8% (65 of 123) of his rebounds came off the offensive glass … Posted his first career double-double with 13 points and 10 rebounds at Houston (Feb. 27) … His rebounding average (4.9) is sixth highest by a Marquette freshman … 15 blocked shots are tied for the fifth highest mark by a Marquette freshman … Averaged 8.9 points and 5.9 rebounds in C-USA games.

Nnamaka was a member of Sweden's national team from 1997-2008. During the 2003 Eurobasket championships, they finished in last place (16th). YouTube - Nnamaka blocks Linas Kleiza's shot during a friendly match with Lithuania, 7/27/07