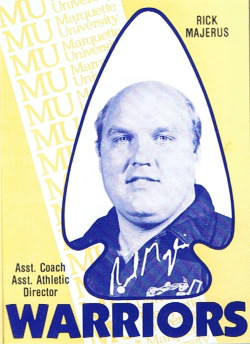 Rick Majerus was born on February 17, 1948 in Sheboygan, Wisconsin. Majerus is something of a fan favorite and cult figure around college basketball, known for being overweight and his quirky, jovial personality. He has had several heart attacks, and suffers from diabetes. After years of rumors that Rick was considered by college programs in need of a coach, he accepted a job as the head coach at Saint Louis University in April 2007.

Majerus attended Marquette University, where he played as a walk-on in the 1967 season, but was cut from the team before his sophomore year. He graduated in 1970 with a degree in History, and would work as an assistant coach with the Warriors for the next 12 years. He worked under mentor Al McGuire until 1977, and under Hank Raymonds until taking over as head coach himself in 1983.

He coached at Ball State during the 1987-88 and 88-89 seasons, finishing with a record of 43-17. He lead Utah to the Final Four in 1998, eventually losing to Kentucky in the National Championship Game.

In 2004, Majerus was hired as coach of the University of Southern California basketball team. However, just days after being hired, he changed his mind, and hadn't been in coaching since. He now works as a commentator for ESPN.

In 2000, he released an autobiography My Life On a Napkin : Pillow Mints, Playground Dreams and Coaching the Runnin' Utes, co-written by Gene Wojciechowski. Amazon.com